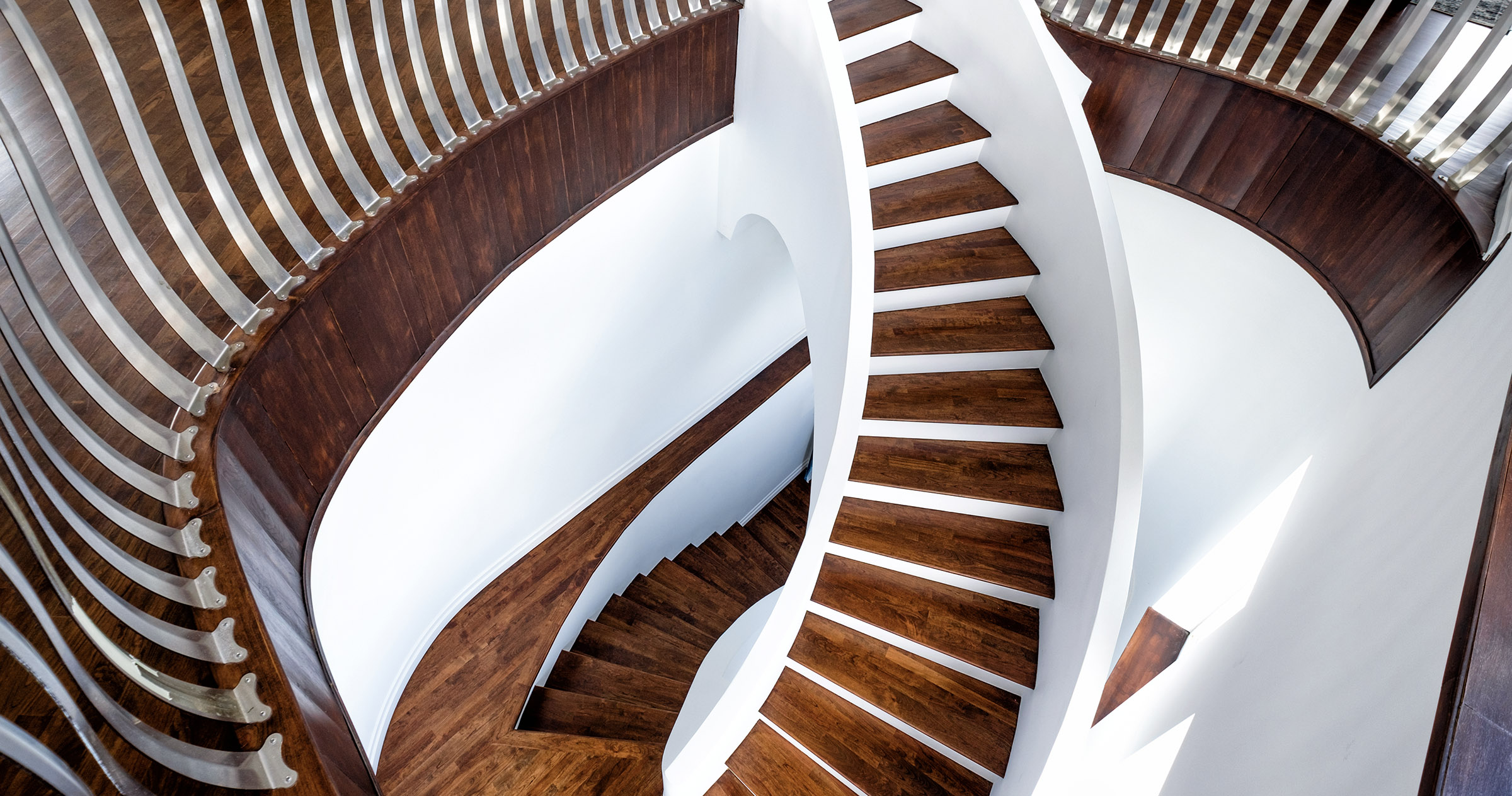 No Sharp Edges Or Straight Lines

In a space where not a single wall is straight, design challenges generally abound. Gabriela Rousso and Vincent Tehrani bought their 3,300-square-foot condo in 2016, and although its oddly shaped walls presented some challenges, they were determined to overcome them, because they fell in love with the unit.

Housed in a 1962 building in Verdun, the sprawling two-storey condo is accessed through a spiral staircase, and features 19-foot ceilings, hardwood floors throughout and a wall of seven-foot-high arched windows that drench the space in sunlight.

“I think the architect was quite obsessed with round edges because every wall is either rounded or slanted,” says Gabriela. “It’s very hard to hang anything like picture frames or paintings, so we leaned mirrors and artwork against the wall.”

There was other work to be done as well. Gabriela took one look at the U-shaped, bright red kitchen and knew it had to go. To reconfigure the space into a galley kitchen, the couple had a wall installed behind the existing room and added a large black island to contrast with white cabinetry. “We kept the original oversized silver fan along the ceiling, just because we thought it was so pretty,” Gabriela says. “It’s actually non-functional now, but it looks interesting.”

“I love that the stovetop is facing everyone when I’m cooking for family and friends, and that I can just look through the windows,” Gabriela says.

Because the main living area was enormous, the couple opted for two seating areas, one a formal sitting room with tufted white leather club chairs and two soft-grey sofas, and the other a more casual den where they could sink into the comfy black sectional and watch TV.

“Generally, in a normal house, you have doors and separate areas, but here we had to place things so there would be good flow,” she says. They also added wall sconces liberally throughout the space to warm it up.

“We wanted a bit of glam along with some comfort,” says Gabriela.

The dining room’s commanding wood table seats eight in black upholstered chairs but was nearly impossible to get up the stairs – each metal table leg weighs about 200 pounds. Gabriela leaned four large beveled mirrors along the dining room wall to add interest and bounce more light around. “We have people over all the time, and it’s the perfect place to entertain. There’s so much seating, even if you have more people than chairs,” she says. “It’s just so easy for people to just walk around, and despite how big it is, there are so many little nooks that make it comfortable and cozy.”

Behind the kitchen, a tastefully appointed guest bedroom with adjacent full bathroom features such luxurious details as an upholstered headboard, glitzy chandelier and two rectangular mirrors that lean against the corners of the space.

The couple moved the master bedroom upstairs onto the mezzanine level and added a dormer on top of the roof to make space for a sumptuous ensuite bathroom that includes a large soaker tub, separate shower, and white textured ceiling. “The walls are angled on this level as well, so this was the only way to make a bathroom without taking up the entire space,” says Gabriela.

Moving to Verdun was a big change from the Lower Westmount neighbourhood where the couple had previously lived, but they love their space and their community. “This is an up-and-coming neighborhood, and it’s fun to watch it develop and grow,” says Gabriela. “There are some beautiful streets with many great restaurants, little markets and bookstores. We’re very happy here.” •

Tourists now flock to London, England to catch a glimpse of Big Ben, the Tower, Buckingham Palace, or other must-see...

A Study Of Contrasts