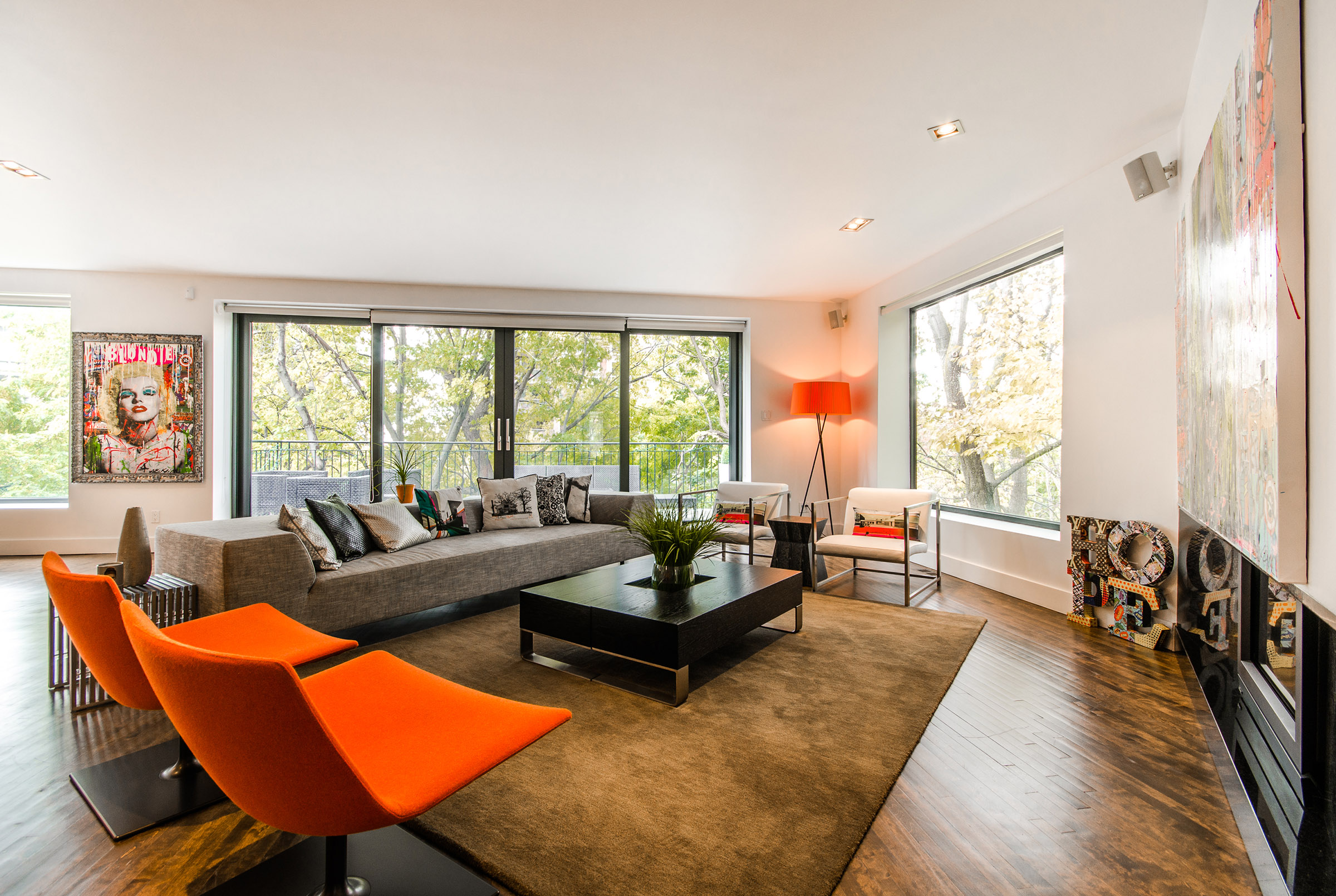 Modest on the outside, redesigned on the inside, a 1954 home is updated for the 21st century

Looks can be deceiving, and a good example of that is this house, which straddles the boundary between downtown Montreal and Westmount. From the street, it looks like a relatively modest red-brick structure, at least by Westmount standards. But it is actually an expansive mid-century home that cascades down the side of the mountain, providing stunning views from all three levels at the back. After the interior was stripped down to its studs in 2007, the house was redesigned into a modern contemporary space by Montreal designer Vincent Boyer, to recapture what would have been the original wonder of the house that was built in 1954.

After all of the hot-water radiators were removed, new large windows running from floor to ceiling were installed right across the back of the house. They offer an ever-changing panorama of the city and natural landscape from morning to night and from season to season.

“Everywhere you look, you can see outside,” says Lisane Elkaim, who owns the house with her husband, Montreal businessman Albert Elkaim. “The sunsets at the rear of the house are spectacular.” Once the leaves fall off the trees, she says, she can glimpse the St. Lawrence River between the office buildings that have sprouted up downtown since the house was originally built. “It must have been beautiful in the 1950s.”

The 11-room house was originally designed by the Montreal firm of Harold Lea Featherstonhaugh, the renowned architect behind many downtown office buildings, legacy homes, and churches, including the Church of St. Andrew and St. Paul on Sherbrooke Street.

Although the original red-brick facade, dormer windows, mansard roof and garage are still there, much has changed as well.

Inside, the house is a contemporary space with an open-concept plan. Several walls on the main floor were removed to open the space. The living room, dining room, family room, kitchen and a small study now surround a large, square wood cube. The sculpture-like cubic form is an oversized closet that conceals the “guts of the home” and grounds the main floor. It opens up on all four sides to provide shelving and tailored storage for the various rooms.

The hardwood floors have been darkened to match the walnut of the wood cube.

Upstairs, there are two bedrooms with ensuite bathrooms; a third bedroom was transformed into a walk-in dressing room. Below, on the ground level, there are two more bedrooms with ensuite bathrooms, as well as laundry facilities, a gym, and an artist’s studio. On each level of the house, there are access points to the outdoors, including a deck off the main-floor living room, and another one off the second-storey bedrooms. At ground level, doors issue onto a private backyard patio.

Vincent Boyer, the designer who redesigned the house, says that there were some hurdles in executing the work. For example, City of Montreal officials responsible for applying heritage-property guidelines contained in the Guide du patrimoine et de la rénovation de qualité prohibited changing windows on the front and sides of the house. There were fewer prohibitions on changing windows at the rear of the building.

“However, on the back facade, we nonetheless had to work with the city and have our proposal approved,” Boyer says. “Since that facade is visible from Atwater Avenue, it’s treated a bit like the front. The city wanted to make sure the overall composition was elegant and balanced.”

And, he adds: “We wanted to maximize the view. You see all that sunlight that comes in over the tree tops.”

Lisane says that when the family moved into the house in 2008, their three children were aged between 20 and 27. The three-level design with its ensuite bedrooms gave them the space they needed. “It’s a house for a family with young adults,” she says.

As for Albert, he says the house has been his muse. A painter, he uses acrylics, and his large works decorate the home. He says that he and Lisane fell in love with a number of pop-art pieces at an exhibit of modern art in Miami a few years ago. But when they discovered how much those paintings cost, he adds, he decided he would go ahead and decorate his own walls with his own works. The large canvases now accentuate the house’s contemporary ambience. There’s a painting of Mick Jagger in the front entrance, another of Marilyn Monroe in the dining room, a Humphrey Bogart and Ingrid Bergman à la Casablanca in the living room, and several others. “Everyone wants to buy the Mick Jagger one,” says Lisane. “I had to have Albert paint ‘Not for Sale’ on it.” •

This house was sold through Sotheby’s International Realty. www.sothebysrealty.ca