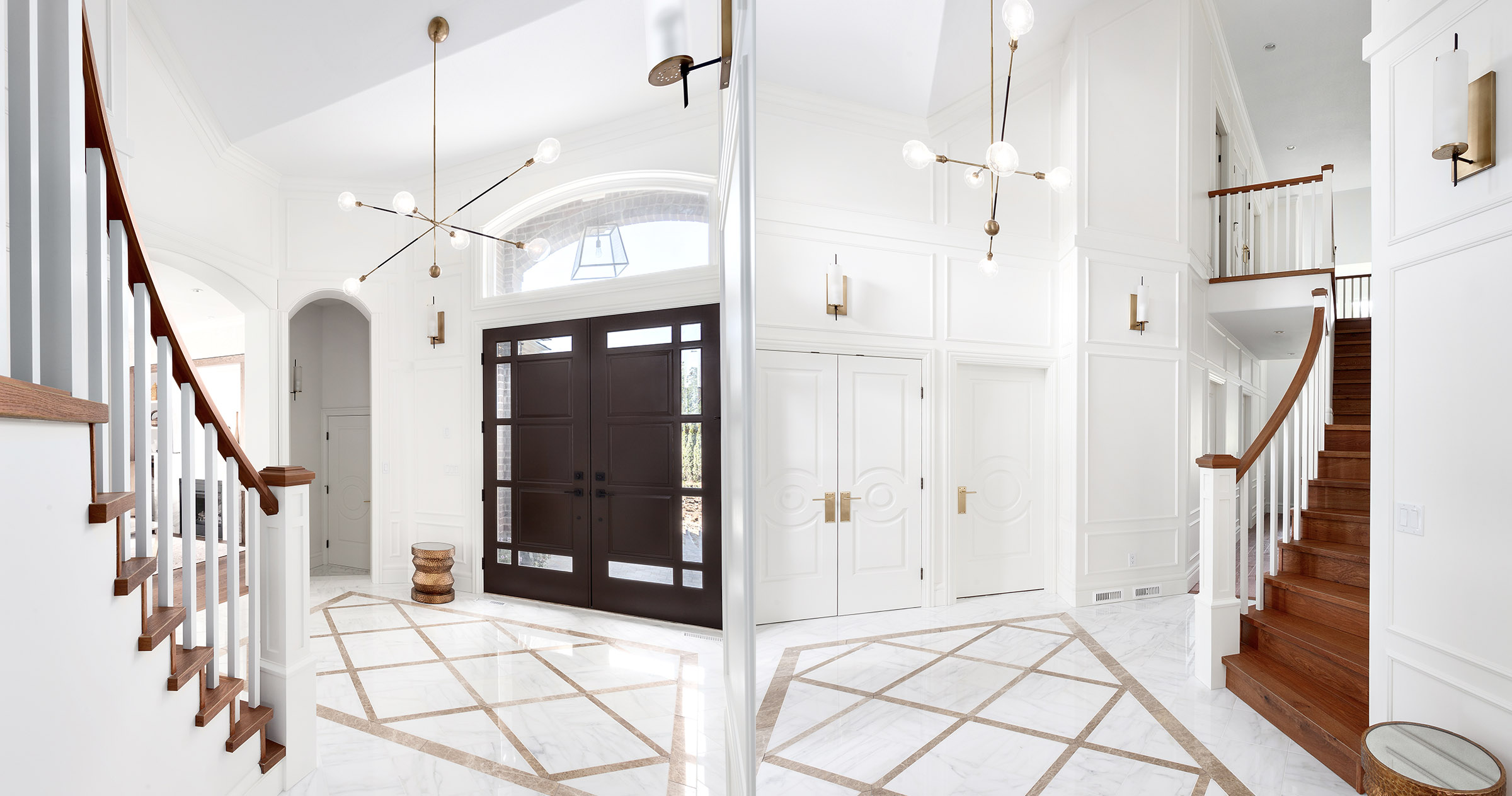 Considering All The Angles

Odd-shaped rooms are no barrier to designing an elegant home

Interior designer Karin Bohn had an intriguing problem. Her company, House of Bohn, was tasked with renovating this 25-year-old home in Surrey’s Morgan Creek district, and the problem presented itself as soon as the front door was opened: the foyer was not only an irregularly shaped quadrilateral with differing angles at the corners; it also had no fewer than six doors or arches leading to other spaces, as well as a sweeping staircase to the second floor.

The main floor is just under 2,000 square feet, and the staircase is central, with rooms that fan out around it. As Bohn explored the house, she discovered more unusually shaped rooms to challenge her.

Those weren’t the only design angles to be considered. The house was to be home to a family of three generations – a couple, their two children, the husband’s parents and his siblings, so it had to suit various lifestyles and needs.

The homeowners gave Bohn a relatively relaxed design mandate. She says that the clients are open-minded and described their desired revamp of the house in terms of having a light and fresh palette. “They’re very trusting, and the creative process was easy,” she says. “They had seen my portfolio. They didn’t talk about particular styles. They wanted a design with a bit of a global influence, not specifically West Coast.”

Bohn acknowledges that by far her biggest challenge was the floor plan, “a little awkward, with odd angles. The foyer – it took days to figure out the layout, and how the floor inlay would line up.”

In fact, the foyer was a particular puzzle, with its several entry and exit points and angles. “That was an interesting stairway,” says Bohn. “I felt that I could make a statement with that foyer.”

The designer also describes the kitchen as having “interesting angles. It really has some dimension to it. My clients wanted something interesting, bright white but a little bit more – thus the atypical coffered ceiling.”

Over the course of two years, Bohn and team renovated the home’s 3,400 square feet to meet her clients’ needs. The result is definitely light and bright, and the effect is evident immediately to anyone entering the foyer. Except for the imposing double front doors, nearly all surfaces, including the floor, are white. Light enters around the front door, augmented by an overhead chandelier and sconces on the walls. The effect is to banish shadows, minimizing angles and discontinuities in sightlines.

The white is tempered by the rich stain on the stair risers, treads and handrail. Hammered copper drum tables, brass fittings on the luminaires, and a medium-brown geometric pattern inlaid in the marble tile floor all add warmth and provide a sense of being grounded rather than lost in white space.

The hardwood floors in most other areas of the ground floor are from Bohn’s own collection with Divine Hardwood. As part of the Cosmopolitan line of engineered hardwood oak, they have the same rich colour – called “Old Money” – as the stairs. In the family room, wood beams outline shelves and fireplace, giving the room’s back wall a sense of solidity.

The family room is open to the formal dining area, which has a spectacular   sideboard made of walnut. Light floods both spaces from generously sized windows. More light from the large kitchen spills through a glass-paned door into the dining area.

The kitchen is certainly bright and light, as desired, but here too the warmth of the floor grounds one’s perspective. The frame of the island and the built-in desk nook are the same wood as that on the family room wall. The kitchen’s most impressive feature is an eye-catching, extensively coffered ceiling that’s a masterpiece of geometric design.

The double-height living room has a slightly more formal ambience than the family room; however, the upholstery and soft furnishings are a mix of colours to provide a welcoming feeling.

A restrained palette and surfaces rich in detail and materials provide a quietly elegant ambience in this home, tempered by generous touches of colour and the organic warmth of wood. It’s a sophisticated and welcoming place for multiple generations to live in happily. •