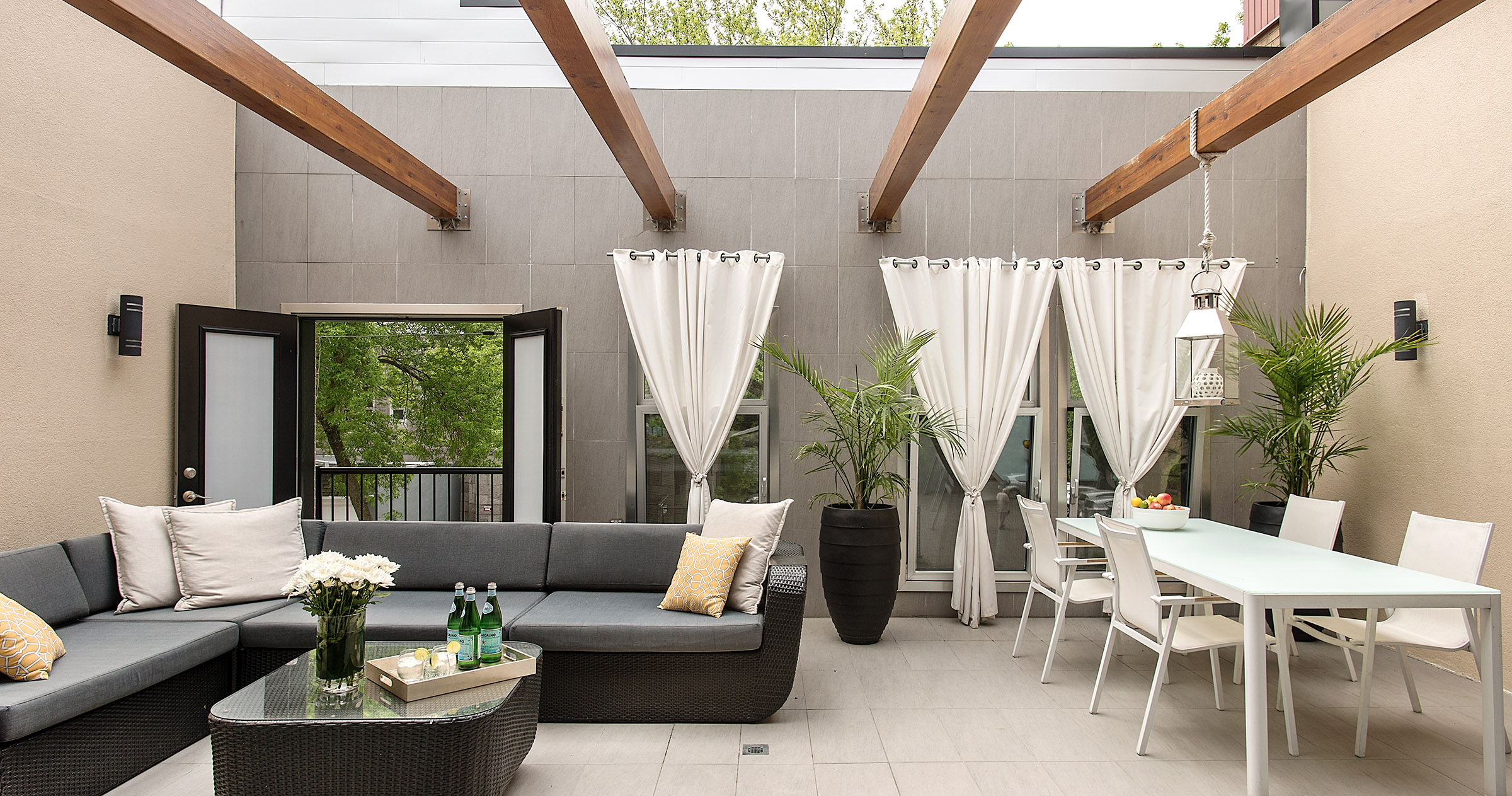 A Return To Its Roots

On a quiet residential street in Little Italy, not far from Montreal’s Jean Talon Market, a former pair of row houses turned auto-body shop is enjoying a renaissance as a private home once again. After a major renovation stripped the building back to its 1920s roots and, then, made it over into a chic two-bedroom living space. The highlight of the new 3,480-square-foot home is a stunning second-floor atrium with exterior walls sheltering it from the street but no roof, so it is open to the sky and is a perfect place to enjoy summer evenings.

The owners of the property met all regulatory requirements of the Conseil du patrimoine de Montréal by maintaining the building’s facade, roofline, brickwork, size and shape of the windows, and other architectural heritage details. However, they managed to create an open-concept design to blend the kitchen and living and dining areas into the exterior space.

The one vestige of the building’s former life as an auto body shop – and a fortunate one at that – is the ground floor mechanical bay with its garage door to the street on the front facade of the property. The setup was grand-fathered, and meant that the building’s new owners could turn the space into a garage of their own with direct access to and from the main street – a rarity almost unheard of in the inner city.

But there were challenges in the rebuild as is the case with most renovations. Daylight – and how to bring it indoors – was a major issue throughout the project. The 24-foot-wide townhouse is attached to properties on both sides. On top of that limitation, the existing building filled the entire lot and there were no front or back yards with which to work. Windows couldn’t be enlarged because of heritage restrictions. The staircase from the ground level of the house to the upper level was closed and dark, making for an inhospitable entranceway to the second floor, where most of the living space is located.

But the owner of the house, who is an interior designer, was undaunted. She devised the idea of removing a wall at the top of the stairwell and installing a floor-to-ceiling laser-cut filigree style screen to let in light from the large doors leading out into the atrium.

She kept the colour palette of the entire space light and airy. There is only the odd dash here and there of an accent colour: a warm aubergine. To keep things clean and uncluttered, she used Brazilian chestnut as the flooring throughout the entire unit and added it to an accent/shelving wall in the main living space.

The end result is a streamlined look. An especially nice touch is the two recessed shelves in the main living room. They display almost-matching his-and-her heirloom statues. Coincidentally, both members of the couple had inherited one from their families.

But as perfect as all the little details are and the decor impeccable, the stunner of the house remains the room without the roof. Other properties in the neighbourhood have used roofs to create inviting roof-top terraces, decorated with plants and patio lighting. However, the feeling of permanence that this outdoor space has, makes it an entirely different thing.

The windows are stainless steel tilt-and-turn models. The floors are heated so that snow melts and drains away. There are wood beams from British Columbia extending from the front facade to the house and reinforcing the design. The lighting is permanent. It all makes for an outdoor space that can be used comfortably from April to late October. The only thing that is missing is a roof. And the owners of the house say they wanted it that way. The atrium has a season and a time all its own. And just like spring, they excitedly await the day when they can open all the doors and windows to the outdoor room and usher in the new season. •