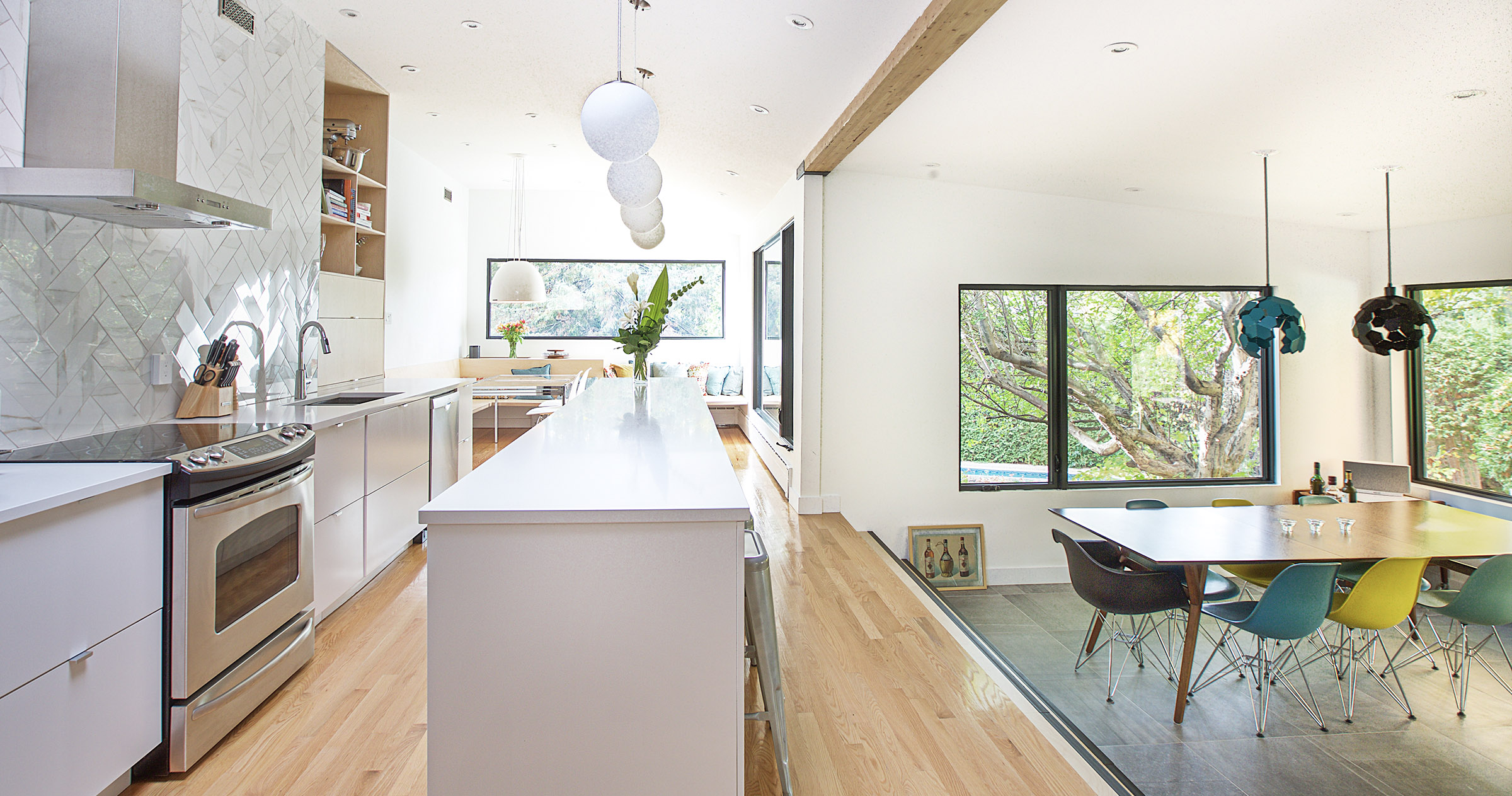 A Dance Of Decades

Stéphanie Leblanc had difficulty visualizing the possibilities for a 1960s house, which had a tired decor dating to the 1980s. “Some rooms were too large, while others, such as the kitchen and formal dining room, were way too small and totally closed off,” she recalls. “The room’s configurations dated back to when people led more separate lives and entertained a lot more formally.”

Her husband, Sylvain Martel, along with designer Virginie Lamothe at Bipède Atelier de Design, persuaded her that the Rosemère split-level could be turned into a spacious, bright and open abode that pays homage to 1960s modernity, albeit with a contemporary flow.

“They reassured me that a structural engineer could help us to lift a ceiling, move walls and install windows most everywhere to create the space that we sought within the existing footprint,” Stéphanie says.

Already charmed by the private treed lot in a pleasant neighbourhood, she agreed to the home purchase and renovations, still holding her breath until she began to see the reconfigured space take shape.

Lamothe and her team started by expanding the kitchen and making it feel a lot more open. They replaced a standard eight-foot-high ceiling with a vaulted one by taking advantage of existing attic space.

By installing an exposed pine ceiling beam, they were able to remove a wall and open the kitchen to overlook the new dining and living areas.

Picturesque windows and large patio doors dramatically frame nature at almost every turn throughout the home. “We made this new space so that everyone could really appreciate an unobstructed view from the kitchen right out into the backyard,” Lamothe says. “The many windows and large patio doors almost make it feel as if the home is extending into the outdoors and, since the property is so densely treed, there wasn’t any need to add window treatments for additional privacy.”

The couple’s minimalist furniture makes the combined room feel all the more spacious and contemporary. Large grey slate tiles ground the space and connect the room with the concrete patio. The outdoor furniture provides a mid-century nostalgia that’s notably different in a garden milieu. “The set is specifically made for outdoor use,” Lamothe says. “And I love how it blurs the lines between the indoor-outdoor boundaries of the home.”

Lamothe’s team custom-made the metal lighting fixtures over the dining table to work as eye-catching art without obstructing the outdoor views. A gas fireplace adds coziness to the living area.

Stéphanie adores the 13-foot-long kitchen island that provides ample space for her to prepare meals while her children sit at the counter doing homework or the family’s guests relax and chat over beverages.

An existing kitchen skylight was reincorporated into the design to maximize natural light in the central space. Discreet recessed lighting provides lustre to the white-lacquered cabinetry while pendulum globes light up the key work area. A classic marble tile boasts a chevron pattern on the backsplash.

“We chose Russian plywood for some of the kitchen shelving and the dinette’s corner banquette as a nod to the simple light woods that were so popular in modern homes in the 1960s,” Lamothe says. “We also refinished the existing oak floors to return them to their original light lustre.”

The dinette’s banquette takes up the entire walls in the space that was opened off the far side of the kitchen. “We extended it the whole length so there’s room to have cozy cushions and stretch out to relax or read under all of the natural light,” Lamothe says.

From the kitchen, the elongated window over the banquette is like a picture frame. “I feel like I’m always looking at these wonderful nature canvasses,” Stéphanie says.

She and Sylvain opted to keep the now family room’s original wood-burning fireplace with its floor-to-ceiling stone casing, as well as a similar partial accent wall. Both echo the stonework that figures prominently on the home’s exterior, which the couple were also determined to save. “We felt it was important to preserve some of a home and neighbourhood’s original character,” Stéphanie says. “Too many homes look far too identical both inside and out these days with their history completely erased.”

The accent wall has been reincarnated with new stairs, along with two unobtrusive storage chests that were custom-built in the same light oak to give the family’s youngsters a place to dump their backpacks when they arrive home from school through a side door.

“We also replaced a wavy gold-and-white railing that dated back to the glitzier ’80s with plainer dark metal that matches the stone better,” Lamothe says. “Not all of the decor ideas out of the ’80s were great.” •

Why Wait For Spring? Do It Now!