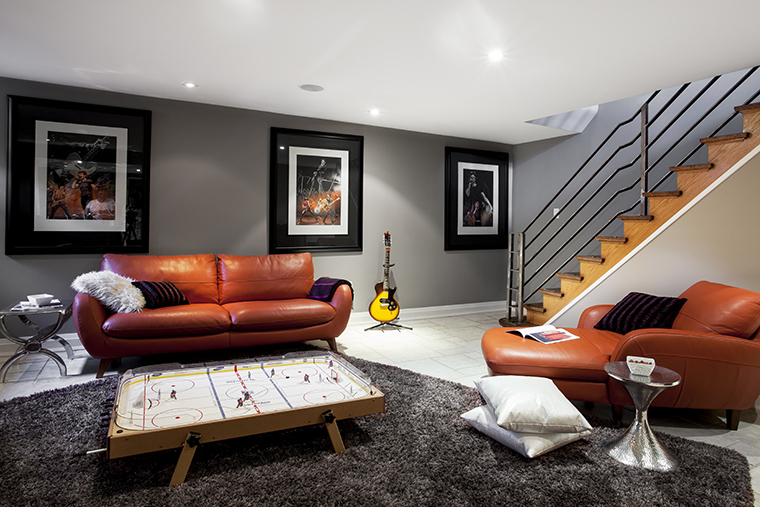 THE PROPERTY EXPERT AT HOME 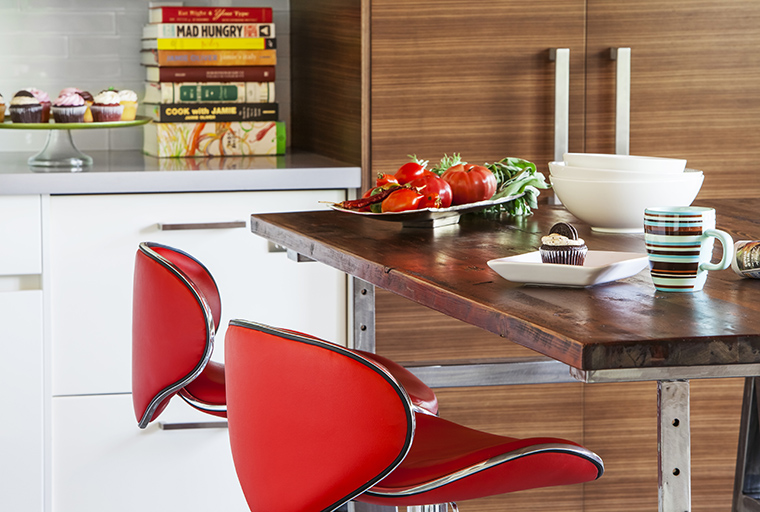 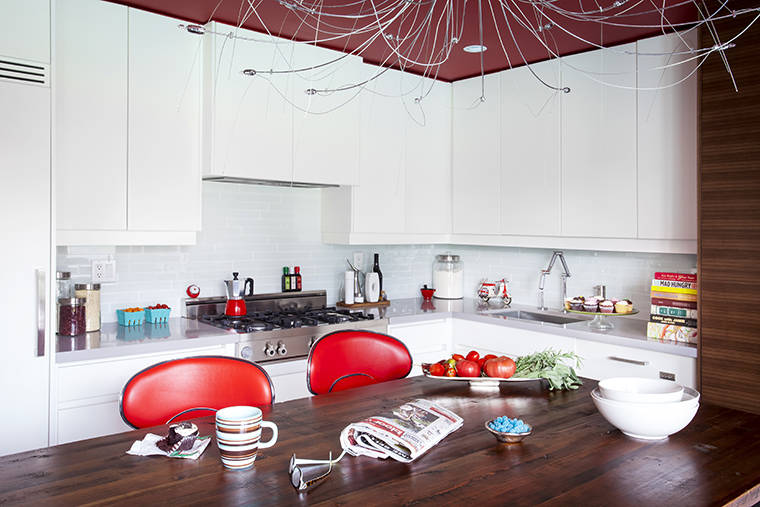 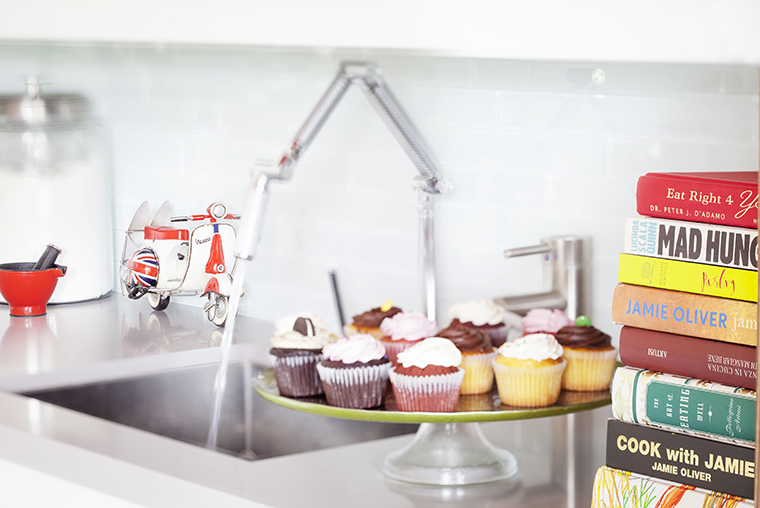 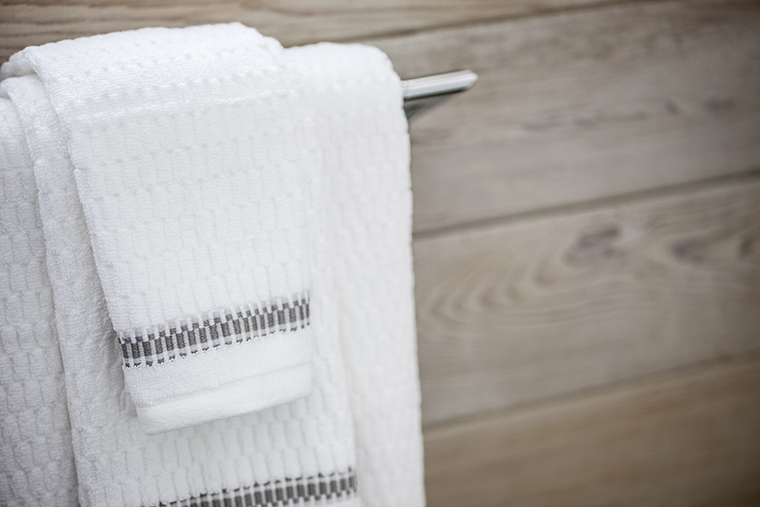 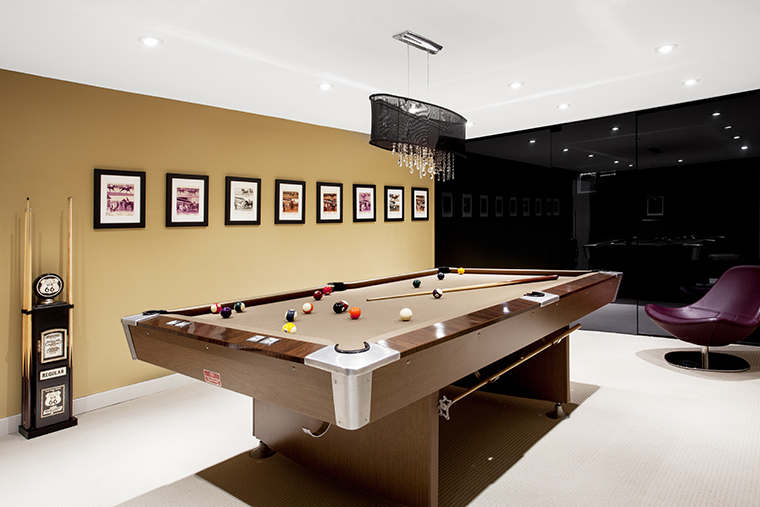 Few homeowners know more about houses than Sandra Rinomato. The diminutive powerhouse runs her own boutique-style real estate brokerage; she’s also familiar to HGTV viewers as the host of Property Virgins and Buy Herself, in which she helps novices negotiate the tricky business of acquiring a house.
When it came to choosing her own home about eight years ago, “I bought strictly on location,” she says. Having grown up in the suburban tranquility of central Etobicoke, just west of Toronto, she knew she wanted to move back to the area with her husband, Gary MacRae, and Nessie, their fluffy white Old English Sheepdog.
Sandra was able to find a 1950s-vintage ranch-style bungalow with a basement. After a significant top-to-bottom makeover, Sandra’s home reflects her persona: welcoming, style-savvy, relaxed and confident.
In the basement she created a pair of comfortable rec rooms, updating a 1950s-era bar and adding a pool table. She turned an office space into a home gym that is separated from the pool-table area by dark glass.
“When we did upstairs, we did it right,” says Sandra. Armed with a plan, she made many of the design decisions herself, with assistance and input from a talented contractor. They removed old floor coverings and opted for a traditional-looking hardwood that matches the older wood floors. “We ripped out the built-in cupboards in the library, updated trim and doors, and renovated the kitchen and two bathrooms. The only room that hasn’t been renovated is the furnace room.”
The home consists of a sizeable living room and two bedrooms at the front of the house, with kitchen, dining room, office, bathroom and third bedroom at the back. One of the biggest changes was “so decadent,” Sandra confesses: she transformed an unneeded bedroom into a vanity room, with space for all her clothes.
The general approach was collaborative. “I had very rigid ideas about the kitchen and bathroom, but then [the contractor] had free range on everything else,” she says. Since she is a serious cook who entertains a lot, the kitchen was especially important.
“I went to town on the appliances. I know I’m going to be here long enough to amortize the cost. I was adamant on a two-door dishwasher,” she says.
The kitchen also features a fully integrated Liebherr fridge and a Gaggenau steam oven along with a regular oven.
The furnishings include basic pieces from such outlets as IKEA and HomeSense, sprinkled with finds left over from home-staging projects. Sandra also likes bold colours. There’s a dark purple in her living room and a vivid red-orange ceiling in the kitchen.
Her advice on a reno is simple. “If you’re renovating to sell your house, do what the market wants,” she says. “If you’re renovating for yourself, do what you want.”