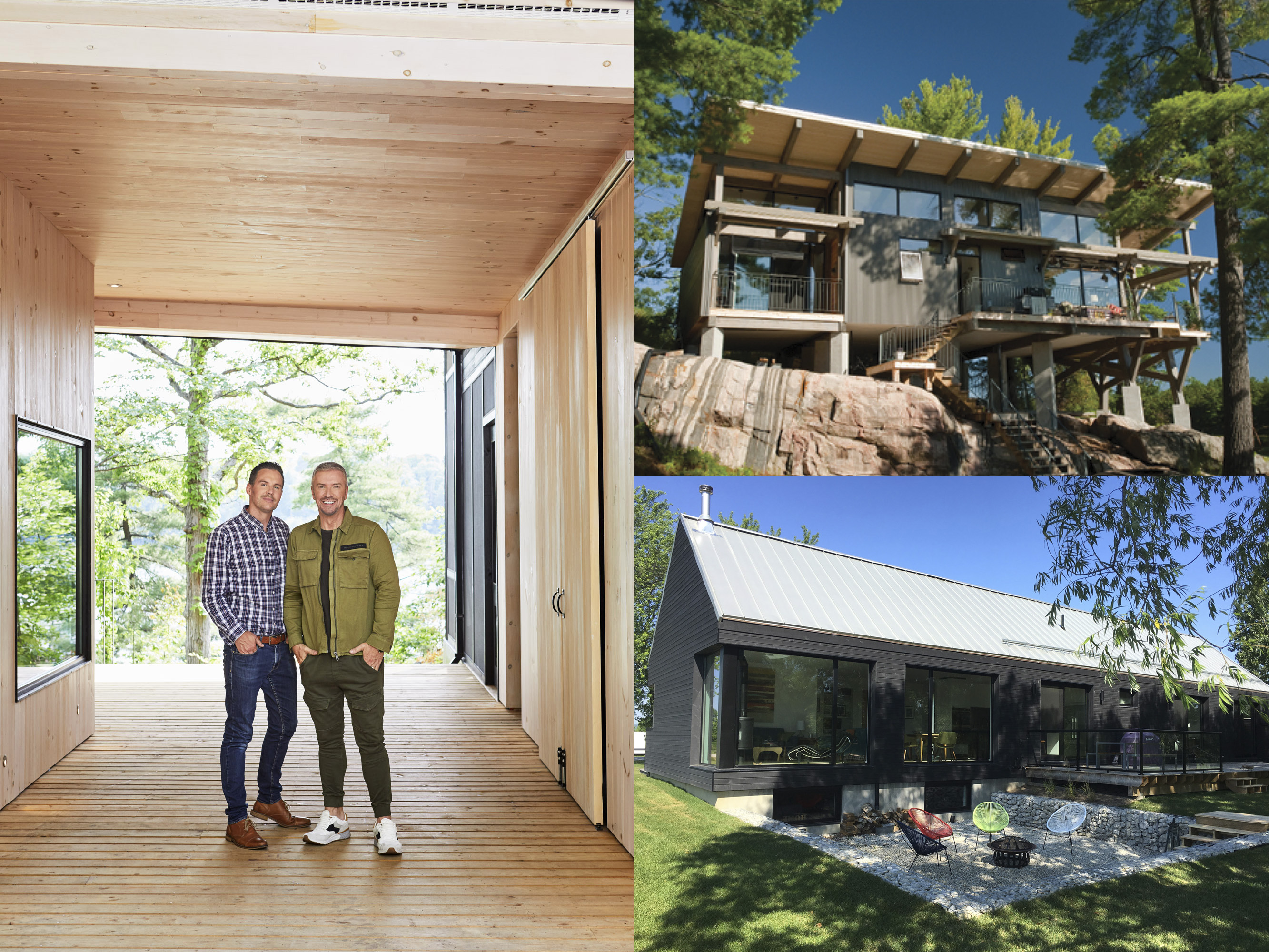 BY COLIN MCALLISTER AND JUSTIN RYAN

For as long as we can remember, we’ve been inspired by beautiful homes. Whether we are designing and subsequently writing about or filming gorgeous abodes, home – as we see it – is where the heart resides.

And it’s that heartbeat that propels us. During our 20-year career, we’ve crafted dream nests for politicians and rock stars, rejigged homes across Australia, fashioned grand villas in the Middle East, and catalogued, for fine shelter publications, dozens of domestic spaces in North America, Britain, France, Spain, and elsewhere.

And, as we write, our style passport awaits its next stamp; this time, we’re en route to South Africa, where we’ll kick off a large residential project. We relish every minute of our multi-continental journey. It’s seldom a chore.

But can we whisper something, sotto voce? Our latest show, Great Canadian Cottages, isn’t actually a makeover series. For once, we won’t be rolling up our sleeves in an attempt to erase the decorative misadventures of others. For once, we can breathe.

Our all-new docu-series positively groans with glossy inspiration, but this series is all about the “after.” In short, it chases the so-called money shot (without the time-consuming reno run-up. Great Canadian Cottages takes viewers into 24 homes, each of which boasts fascinating architecture.

One such domicile is the live/work space of photographer Larry Williams. A spectacle of glass and metal, it’s not typical of Peterborough’s architectural vernacular. The Stoney Lake “box,” envisioned by architects GH3, sits stealth-like atop the ubiquitous granite of this robust landscape.

The blizzard-white cottage has excellent flow thanks to its open-concept design, and is bathed in natural light, courtesy of large window blinds that open and close at the touch of a button.

In the living room, a leather sectional sofa is perpendicular: one arm faces the lake and the other the white kitchen. Flat kitchen cabinet doors ensure the aesthetic remains uncomplicated, while seamless (virtually indestructible) Corian clads the island.

Art and sculpture bestow shots of colour and the view of Mother Nature adds more. “It’s a constant evolution,” says the homeowner. “The marriage of climate and landscape, with water and sky, provides endless interest. No two days are the same.”

Another cabin featured in the series is Blackbirch, the black-roofed retreat of Chris and Susan Meiorin, their daughters Rachel and Taylor, and the family’s beloved dog, a Vizsla called Mia. Chris and Susan are owners of Euro Vinyl Windows; little wonder, then, that the fenestration is so on point. Overlooking Drag Lake, Haliburton’s finest body of water, the 2,400-square-foot, tri-level rectilinear home boasts three ground floor bedrooms, a cavernous living/dining/kitchen area, and a master suite accessed via glass-sided stairs that appear to float against a barn board wall.

Nothing feels contrived in this home, designed by Toronto’s STAMP Architecture. Every object within the post-and-beam structure was chosen by the family or is a gift from friends. This is where the Meiorin clan decompresses.

“We adore Toronto,” explains Chris as our film crew bustles around, “but when we travel north, that’s when the magic happens.” Susan adds: “This place is our sanctuary. Chris rarely stops working, but coming here lets him recharge.”

Blackbirch is a magical environment, a thoroughly cool world. Tune in to explore further when our new show launches.

Next on our extensive cottage tour is the Georgian Bay retreat of architect Charles Gane. Wandering the space with its passionate creator, we learn a little of the project’s history. Charles, his wife Robin and their family, spent the first season camping on the rock face, as the build progressed. Safe under canvas, they dreamed of the majesty that would emerge from the softly undulating typography. And boy, has it emerged.

But this wasn’t an easy build. Given the cottage’s remote location, all materials, Charles explains, had to be shipped by barge. “When you’re working on the mainland and suddenly need an ancillary component, it’s easy to grab what you need. But when you have only water access, the rules are different: you can’t simply dash to a supplier on a whim. Planning is critical.”

Measuring 2,125 square feet, the cottage was built on a framework of Douglas Fir. All timbers were prefabricated off-site, with most interior finishes left untreated to enrich the patina. Exterior surfaces, on the other hand, were protected with a clear, penetrating sealer to add visual warmth. As viewed from the lake, the rectilinear cottage – for all its drama and scale – appears to recede, thanks to a combination of honey and grey tones that ensure it doesn’t dominate the landscape. Now you’ve glimpsed a few of the vacation retreats we visited, we hope you’ll tune in. Bear in mind that while each home we profile is different from the others, they all share one aspect in common: they’re all Great Canadian Cottages.

Designed and Built Just For Them