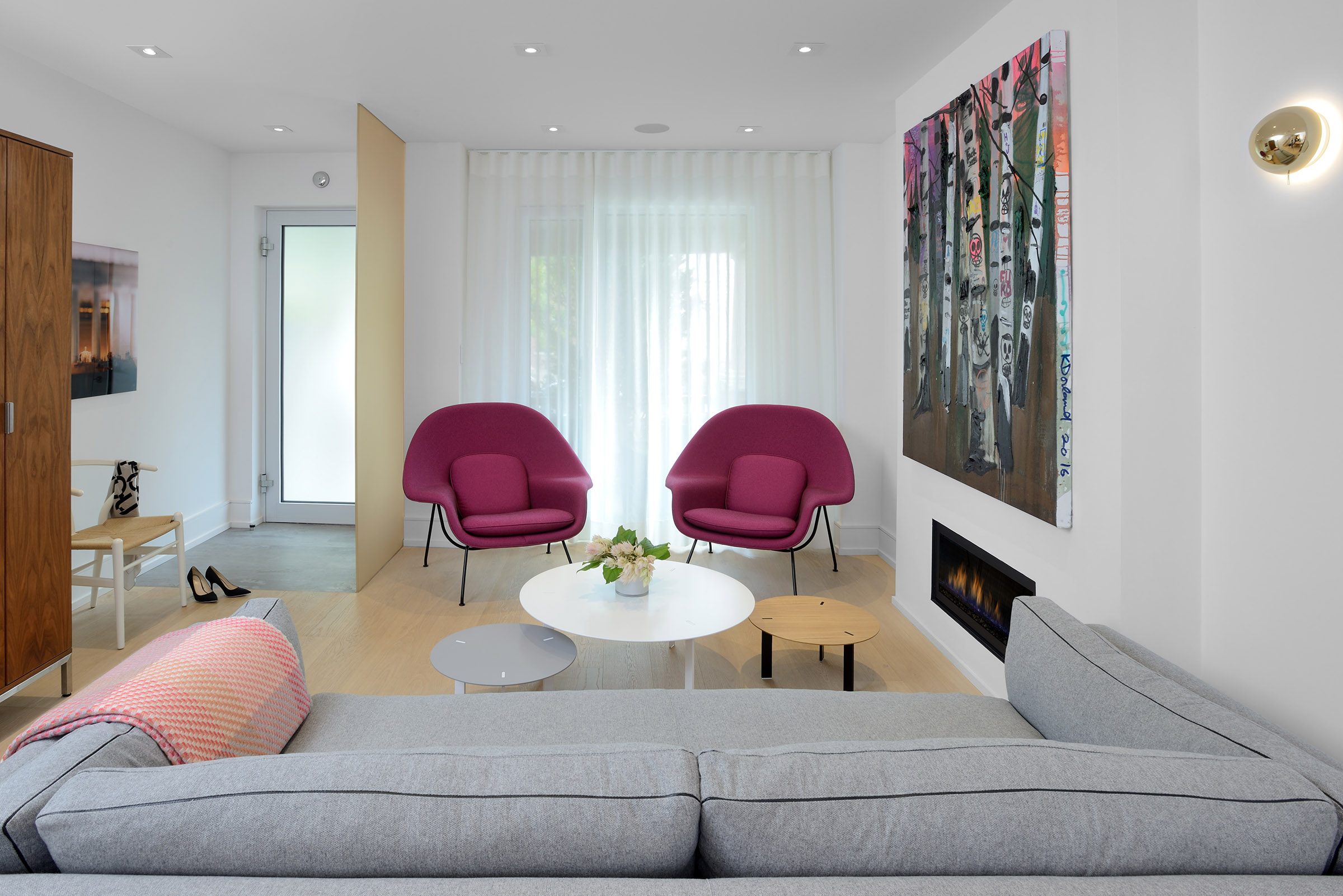 by Sarah B. Hood

Designer Kirsten Marshall of Palmerston Design Consultants Inc. still laughsat the memory of her client’s first instructions for what was later to become a sweeping makeover of an outdated home.

“This client literally emailed us through our website and told us that he wanted us to ‘make our ugly house not ugly,’ ” she recalls. “I thought it was a joke.”

But Toronto lawyer Andrew Powers was sincere. He, his wife Danielle Powers, their son Liam, and the family’s Brittany, a French hunting dog called Rosie, had been making the best of their comfortable but outmoded west-end Toronto home for years, and it was time for a change.

When they bought the house, “it had just been renovated down to the bricks,” says Powers. “It was well done, but it was never my style; it was traditional.” Nonetheless, he adds, “we did our best to make it work. At the same time, my art collection had begun to grow, and it was going in a different direction; it wasn’t fitting in with the house.”

In his law offices, Powers was exposed to an exceptional collection of Canadian art. He was especially drawn to two Edward Burtynsky photographs from his famous Shipbreaking series and two drawings by Marcel Dzama that hung outside his office. They “got me moving a bit more in a contemporary direction,” he says.

He began to pick up pieces in galleries around Toronto, beginning with more traditional work (which he now keeps in storage and refers to as his “teaching art”) and gradually stretching toward more conceptual pieces, including illuminated installations by multimedia artist Kelly Mark, acquired through Diaz Contemporary, and work by the internationally known novelist and visual artist Douglas Coupland from Daniel Faria Gallery.

Eventually, the family decided to redesign the house to fit the artwork, quite literally. In some places, walls had been structurally reinforced to accommodate the weight of large art pieces, so one of the requirements was that – whatever else was changed – key pieces in the collection had to return to the same spots.

Everything else was fair game, and ultimately the narrow house (less than 14 feet wide in the ground floor living room, and not quite 10 feet in the kitchen) was utterly reconfigured. Stopping short of actually gutting the home, Marshall changed out windows and flooring throughout the house, redesigned the main staircase and converted a second-floor bedroom to a bathroom.

The resulting unified interior has the clean, austere feeling of a contemporary art gallery, with an inviting Scandinavian ambience. “We wanted warm wood, so the floors are a light rift-cut oak,” Marshall says. “It was really about keeping it modern, but still keeping it warm.”

The furnishings, mainly good-quality transitional pieces bought to suit the home as it used to be, were entirely replaced, beginning with a pair of muted raspberry-coloured Saarinen Womb chairs that Powers picked out for the living room before the renovation had even begun. He remained closely involved; “I’m very particular and I had a vision for many things,” he says.

To open the ground floor, a pony wall at the front entrance was replaced by a sheet of gold glass. The front window (from Montreal’s Alumilex, as were other windows and the front and rear doors) was extended down to the floor. The sofa, from Montauk, was chosen for its low back, and a custom armoire from Style Garage created family closet space. The walls were painted white with Benjamin Moore’s Chantilly Lace.

The most dramatic alteration was the replacement of the original staircase with custom white oak open-riser treads enclosed by a floor-to-ceiling sheet of glass in place of a railing. “There’s recessed lighting along the floor as well as up the stairwell; it’s quite fantastic in the evening,” says Marshall, who credits contractor Nuno Teixiera of Caliber Group with the execution.

At the top of the stairs, an office made way for a room that Marshall calls “one of the nicest bathrooms we’ve ever designed: it’s just a gorgeous space to be in.”

The end product is an art gallery that can be inhabited. The simplicity of the look gives prominence to the artwork, which, says Powers, “contributes to the narrative of the house and the dialogue between the people who occupy it.” •