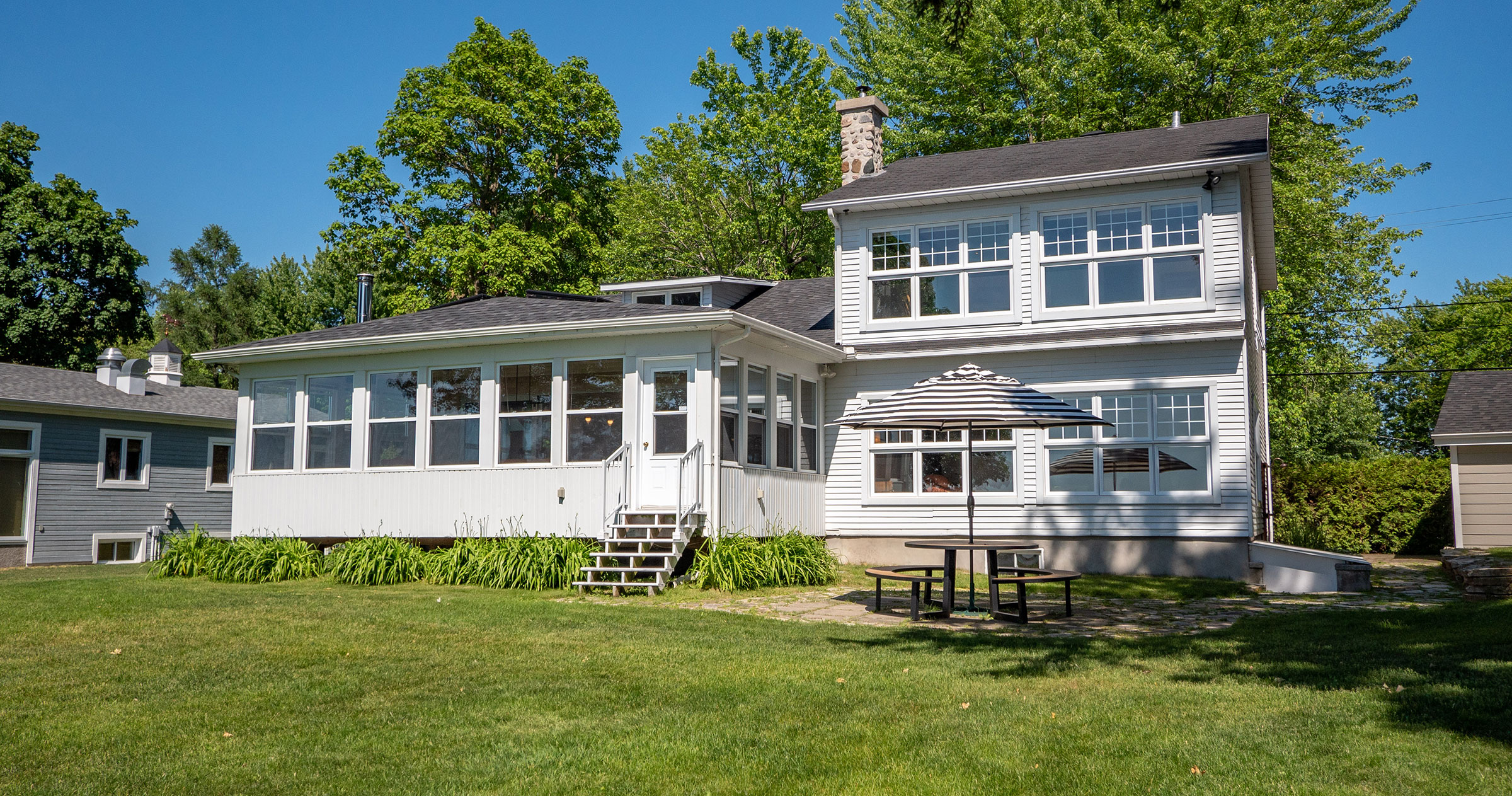 No expense was spared by the owners of a New England-style cottage on the north shore of Lake Champlain when it came time to upgrade their property. It has 200 feet of waterfront, a private boat launch and mature oak and maple trees that shade the expansive lawn from the back of the house to the shoreline.

The owners’ goal was to bring their once-modest seasonal cottage, circa 1959, up to a standard that matched the premium waterfront property that it is, just a 45-minute drive south of Montreal.

High-quality windows, top-of-the-line appliances, oiled cherrywood floors, radiant heating, quartz countertops, heated bathroom floors and a new addition were among the many upgrades included in the three-stage renovation. The four-bedroom cottage in the municipality of Venise-en-Québec is no longer just a summer getaway retreat; it is a year-round home.

For much of the late 20th century and early 21st, Venise-en-Québec, situated on Lake Champlain’s Mississquoi Bay, a stone’s throw from the Quebec-Vermont border, had a RV-camping reputation. To be sure, there are still several campgrounds within walking distance of the town’s big beach. But gradually, Venise-en-Québec has been sprouting evidence of accelerating gentrification, with new and renovated lakefront cottages like this one, which was listed during the summer of 2020 for $795,000 with Royal LePage.

Over the past five years, many of the smaller three-season cottages dotting the town’s shoreline have been scooped up, torn down and replaced with tastefully designed new cottages. Other older cottages have been totally rebuilt and expanded into year-round homes, including this one located on Pointe-Jameson Ave., a road that runs up and down each side of the peninsula that juts out into the bay at the eastern end of the town, where much of the transformation is underway.

“It’s a well-kept secret,” says Sylvie Ménard, the listing broker. “It’s one of the best places in the area for sailing and surfing. The wind is perfect. There’s a whole new generation investing in the community.”

Ménard, a broker with Royal Lepage Humania, says the property underwent a succession of renovations in 2006, 2012 and 2015.

The first one saw new plumbing, electrical wiring, insulation, and radiant heating installed; the cottage was also lifted to accommodate a new foundation and French drains.

The second renovation entailed taking down interior walls and creating a new floor plan that would transform the main level into an open-concept space with eight-foot ceilings. A second-floor addition was built over the family room to allow for a main bedroom and ensuite bathroom. New windows were installed, as well as Alumilex floor-to-ceiling, wall-to-wall glass patio doors separating the restored sunporch from the main living space.

The third set of renovations featured a new kitchen (custom millwork, quartz countertops, a Bertazzoni gas stove and Fisher & Paykel appliances). The attic was turned into a bunkie for teenagers and the home was then decorated.

The colour scheme is modern nautical: white, turquoise and sea green accents. As a result of municipal infrastructure upgrades, the property is now connected to the town’s water and sewage systems, although it still has its own 130-foot-deep artesian well and septic system. “Everything is of such high quality,” says Ménard. “Everything is new. It’s just perfect. And the attic is now a real space that even has a lake view.”

Similar waterfront cottages in and around more exclusive areas, such as  Knowlton, Lac Brome and Bromont would be so much more expensive, she says.

Ménard says she sold a $1.26-million property in Venise-en-Québec in November 2019, previously owned by Robert Aumont, the founder and president of Club Piscine.

The gentrification momentum in Venise-en-Québec is a good reason to give the town a second look, she says. In fact, just before this issue of Home in Canada went to print, a bidding war erupted for this property among four prospective buyers. The property is now sold. •

Spectators and fashion enthusiasts have been given a peek at the creativity of the late shoe designer Vince Camuto with...

In addition to an abundance of colourful and fragrant flowers that sprout in Canadian gardens every spring, “For Sale” signs...

Move over Los Angeles, where some of TV's hottest reality shows focus on the city's luxury real estate market. L.A....

The Montreal Fall HomeExpo, presented by DuProprio, is the must-attend event for anyone planning or carrying out home decor and...