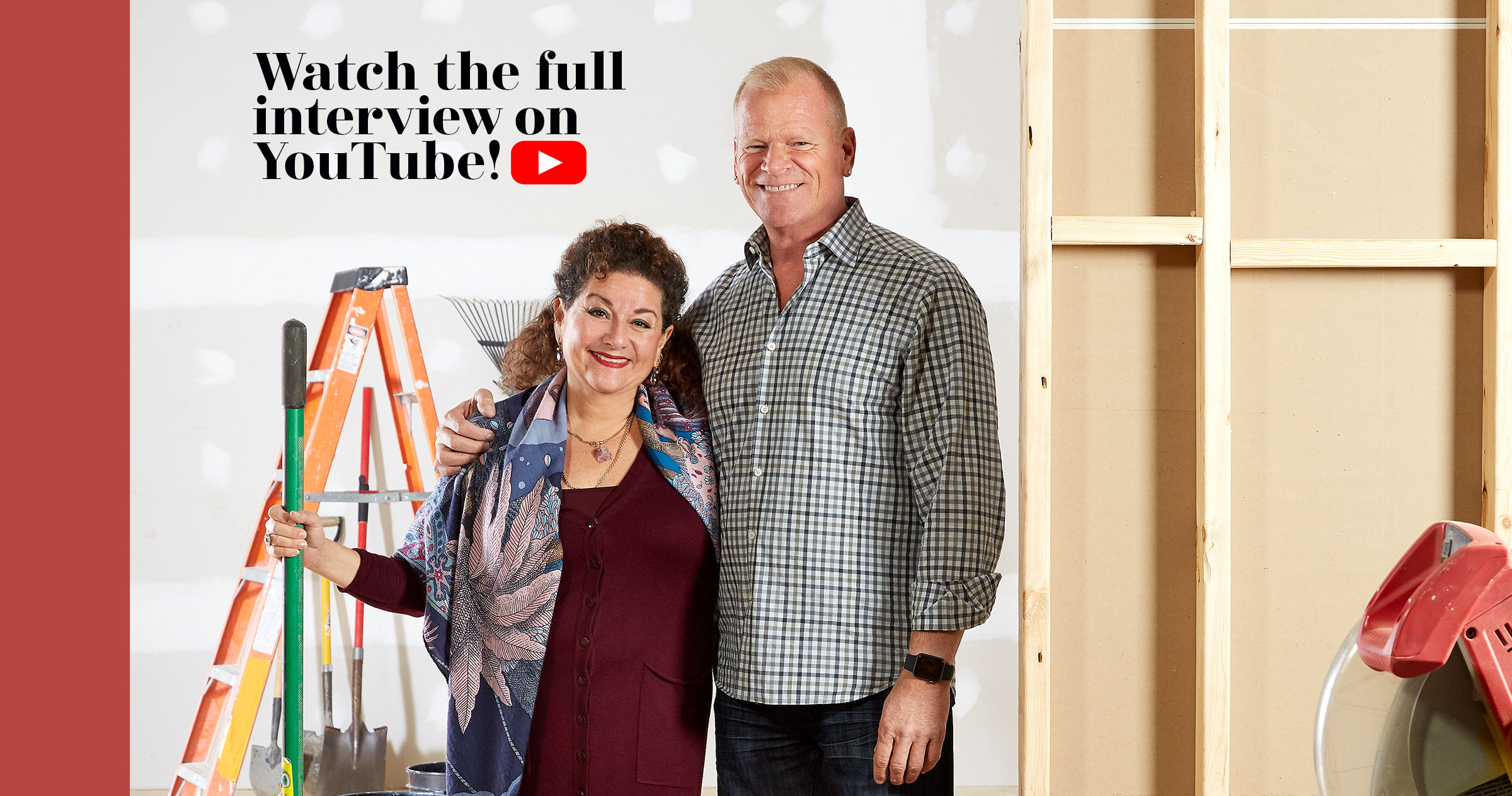 My meeting with Mike Holmes was every bit as exciting as I had dreamed. Very few celebrities can live up to the impression that they create on screen; how can one person who looks like “Mr. Clean” actually be that charismatic? Larger than life? But, on a grey, blustery day in Toronto, there he was.

We met at his large, quasi-commercial, sprawling offices in the Toronto area. He sauntered in, perfectly professional, perfectly on time, in his lumberjack jacket, at ease and looking exactly as we all picture him.

“I love creating. I love designing. It’s just what I do. I build houses. I solve problems. If you ever see me standing there with my arms crossed, looking … all of a sudden … it’s a pose. It’s not a pose. It was me thinking. I was thinking: ‘How am I going to fix that?’ I mean, I come up with it in my head and boom, I’ve solved the problem.”

Mike Holmes is well known to Canadians as the man who not only fixes the renovation messes made by other builders and contractors, but has actually caused building codes to be rewritten and has created his own charity.

A skilled contractor from the age of 19, Holmes introduced the television program that made him famous, Holmes on Homes, in 2001. The show featured him mitigating the damage done by inept and/or dishonest contractors. Other shows followed, including Holmes Inspection, Holmes Makes it Right, Holmes 911 and a new show, airing on CTV later this year.

We took over his personal office to conduct the interview, which Holmes did not mind at all. I was impressed by his kind and affectionate grace, and how charming and direct he was with me.

The first topic of our interview centred on the most important and first catchphrase that he trademarked in 2007: “Make it Right.” I asked him where it had originated, and he told me it came from a saying of his dad’s: “Simple. When I was young, my dad would always say to me, ‘Mike, if you’re going to do something, do it right the first time.’ He was a good man. What he meant was you are only as good as your word; it follows you wherever you go. ‘Make it right’ was quite simple. We need to live in a healthy home. We should be living in a home that lasts forever, like the three little pigs. I always talk about the three little pigs.”

When we speak about “legacy,” we can mean our kids, our philanthropy, and what we have accomplished with our work. In talking with Mike Holmes, it was clear to me that all of the above are in his thinking all the time. He reminisced about being brought up in a “bad” neighbourhood and said that he knew that, even when he was younger, his kids would never be brought up in that same neighbourhood. And yet, he says, “kids, humans especially, don’t learn unless they bang their heads. It’s called bruising. I don’t care what anyone says. Often, we don’t listen to advice because we need to learn from our own mistakes.”

“Yes, I get frustrated when I rip (a house) apart because I’m looking at it saying, ‘Who the hell did this? Why did they do it this way? This is how it should be done.’ Then, I do it that way.”

Two of his three children—Sherry and Mike Jr.—will join their father on their new show. The three also teamed up on Holmes 911, which premiered on CTV Life last fall.

Holmes is excited about the new series, which shows the trio using their construction expertise to help communities transform vital structures and buildings to—what else?—make it right! He’s particularly proud of his kids on this show, saying that although they started out being competitive as kids, they grew up to realize that the values that their dad had taught them about building community and helping were what they wanted to show to the world and each other. “Pay attention to Sherry,” he says. “She’s a passionate tradeswoman. She really is, but she’s also keen on helping others.

“Sherry and Michael really grew close from doing the show together. They worked long hours, but by the end of it, they were happy because they were responsible for helping the organizations that deserved our help. They worked together to make it right.” We will all be watching, I am sure, as soon as the Holmes family’s new show is released. It has been delayed because of the covid-19 situation.

A large part of my conversation with Mike Holmes got sidelined by my fascination with his impact on the industry and his impressive product partnerships, not only in Canada, but around the world.

One of his greatest accomplishments is spreading awareness of the impact of radon gas. Radon, a naturally occurring gas, can infiltrate homes and sicken the inhabitants. Holmes started working with Canadian health organizations to educate homeowners, bringing it to people’s attention, starting in 2007.

“How many people have had lung cancer who never smoked in their lives? Have they ever tested their homes for radon? Because it comes out of the ground and is odourless and invisible, it is difficult to detect. The smartest thing to do is have your home professionally tested for radon. It’s time we start paying attention to our indoor air quality.”

He has made it one of his missions to encourage homeowners to test their properties for the deadly gas.

Besides his famous Make it Right trademark, Holmes’s lexicon includes another phrase: “Build from the outside in,” which I wanted to address with him before our time was up.

I asked him about it because as part of this intriguing series on brilliant Canadians, what I have loved is how each has developed their own lexicon. And so, I asked because my father, also a builder, had a similar expression which was, “Build a strong foundation, and all the rest will follow.”

“What’s the difference?” I asked. He replied that he was sick and tired of homeowners who don’t look at anything when they buy a house or get a good inspection. “They just say ‘Oh honey, let’s put in a new kitchen.’ Start from the outside and work your way in,” says Holmes. “Protect your home from the outside first.”

And finally, when I ask him if his life turned out the way he wanted, he answers “yes!” because in the end, he is everyone’s friend. Everyone he meets tells him “Don’t stop, whatever you do,” even though he says he is getting tired, and sometimes just wants to get on his boat and let it all go.

I ask what tires him out. “What’s frustrating me is that things really aren’t changing as fast as I had hoped,” he says. “Am I seeing the next generation get into trades? Yes. Am I proud of that? Yes. Has my family had any part to do with that? I sure hope so. That makes me feel better. Eighteen years on television and that’s a long time. There’s still a lot of work to be done.”

What upsets Mike Holmes the most is that there are no consequences, just like minimum codes, for contractors who leave with jobs half-finished or poorly done. If a contractor takes your money and demolishes your bathroom and then leaves you with no bathroom for six months, you have absolutely no recourse but to get a lawyer and go to court, which takes months. “Stealing a pack of gum; you go to jail quicker than if you take $100,000, demolish a house and just leave,” he says.

Often, to change minimum code, there have to be disasters. Fires, floods, deaths. Holmes wants to create changes so that houses built now will last lifetimes. All in all, though, he is happy with his life’s work. He is happy that he has created opportunities for the next generation to enter the trades, as well as for women, who have become interested in pursuing careers in the industry that they may have not considered before.

I asked him what there is left that he must do. And he said he wants to build the greenest, strongest, smartest houses somewhere in this country, that everyone will pay attention to. “When I do this, I’m done,” he says.

“Don’t,” I said. “We need you.” And we do. We need people like Mike Holmes in this world. That’s what I wanted to say. But the truth is I have only ever met one like him. So, we need him now more than ever. •

Community Spirit in a Residential Garden