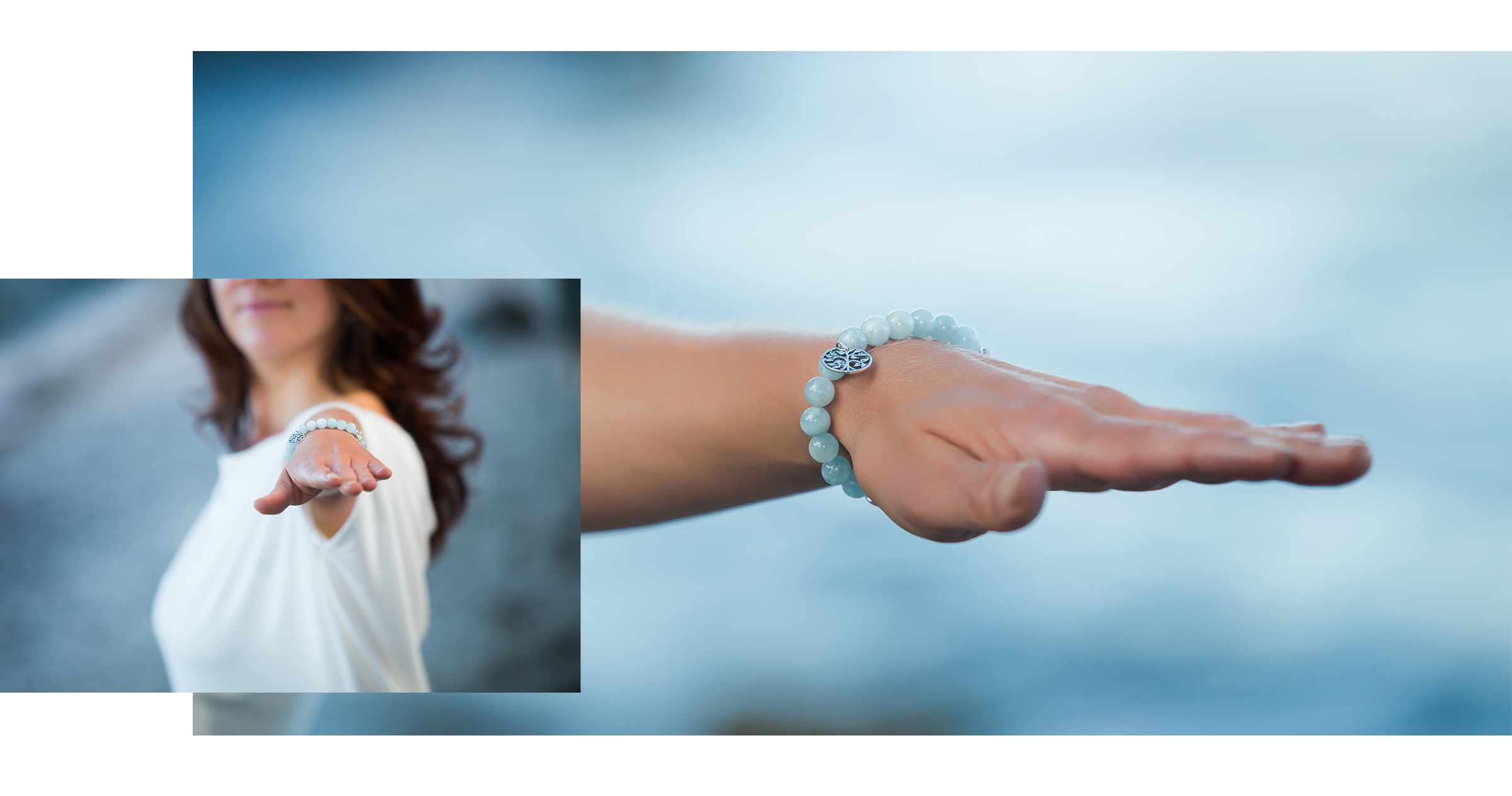 Get quiet enough and you hear your heartfelt passions, as Jacqueline Medalye, the owner of Salt Spring Malas and Yoga Jewelry, discovered years ago. “The more I practised yoga, the more I desired a simpler life with meditation, yoga, eating well and making beautiful jewelry that helps others to achieve greater clarity,” she says.

With its numerous yoga practitioners, Salt Spring Island, B.C., is nicknamed Rishikesh West after the Indian city that is renowned for its study of yoga and meditation. Medalye is one of four mala makers on Salt Spring but the sole designer using semi-precious gemstones.

Her work incorporates the beauty of lapis lazuli, fire agate, tiger eye, white tourmaline, zebra jasper and numerous other stones depending on how she’s called to put necklaces or bracelets together. “I love using my artistic and academic mind to create malas that bring people greater peace and happiness by encouraging them to meditate,” she says.

Medalye was born to bead. She grew up in Toronto’s fashion district where her mother was a designer in the 1970s and ’80s. “I didn’t want to sew, but liked choosing buttons,” she recalls. She entered her first bead shop at age six and has beaded ever since. “I made jewelry for school friends, and then formed a company that made eyeglass chains to pay for university,” she says.

Medalye first learned about malas in India where she went for six months to do her PhD fieldwork on South Asian politics, development and the environment. Once there, she just wanted to do yoga. “I completed the PhD, all but the dissertation, but knew I wouldn’t pursue an academic career when I returned to Toronto,” she says.

She moved to Salt Spring Island where she now lives with her husband, Jerry Witmer, and their newborn son, Gerald Craig Witmer III.

Medalye and Witmer, an artist, lived 45 minutes apart in southern Ontario but met in a store within six months of each moving to Salt Spring Island and knew they were soulmates.

Medalye’s daily routine encompasses meditation, yoga, long dog walks, and several hours of handcrafting mala jewelry with Witmer before he sets off to paint and she prepares good food (grown by them all summer) for dinner.

She believes her lifestyle and location positively energize her creations. Half of their house sits on white quartz that’s believed to refresh all gemstones. “I don’t do anything with stones for at least one lunar cycle,” Medalye says. “For centuries, traditional societies have considered the full moon sacred, a time for planting and harvesting. Aboriginal, pagan, Buddhist and Hindu cultures associate the full moon with changing energy, cleansing, planting, fertility, and transformational energy. Gemstones are believed to require cleansing and recharging regularly to restore their healing frequencies. Because we work with gemstones from all over the world, we cleanse them in a traditional way using the moon’s energy. We keep the gemstones here in the studio for at least one lunar cycle, charging them in the light of the moon with our quartz foundation.”

Interestingly, the space she knew would be her yoga studio on their rented acreage turned out to be exactly 108 square feet.

The mala, which dates back by at least 7,000 years, is a circular strand of 108 beads to keep track of each conscious breath or mantra recited in meditation. Tibetan and yogic teachings suggest that 100,000 breaths or mantras lead to enlightenment within a single lifetime.

“You’d have to start at five doing a mala three times daily, and even then, there’s no guarantee,” Medalye laughs, “but the beads help to maintain focus.”

Eight beads account for the mind wandering, so it’s more certain that the remaining 100 are consciously used toward the ultimate goal. A bracelet typically has 27 beads (or 21 in Tibetan tradition), while a marker is placed at set intervals on a full necklace. “It’s hard to do 108 consecutive breaths or mantras without our minds drifting,” Medalye says.

Various religious texts consider 108 a special number. Hindus note that it’s among the few numbers divisible by the sum of its parts (i.e. 1+0+8=9 and 108÷9=12). There also happen to be 108 Hindu gods and 54 female and 54 male human aspects in Hindu teachings.

Most Westerners aren’t yet familiar with the symbolisms even though all religious prayer beads were originally inspired by malas. “My clients have typically practised yoga for a few years and want something to remind them to practice,” she says. “Or they’re starting to deepen their meditative practice.”

The mala’s North American presence took hold less than a decade ago, after Elizabeth Gilbert’s book Eat, Pray, Love hit movie screens. “Twenty years ago, you had to go to India to find malas the way I did,” Medalye says.

Hindu-style malas have tassels whose strands combine to connect us to Divine Oneness. Tibetan malas remind practitioners to incorporate the senses in meditation: by seeing the deity represented by a pendant, feeling the texture of the beads, smelling the beads if they’re made of sandalwood, black lava or rosewood (or burning incense if they’re not), and listening to each breath or mantra. “You just have to add tea for taste,” Medalye says.

Malas have become more popular for reciting mantras since many Western yoga teachers have added music to classes. “What’s interesting is when you sing a mantra, you have to control your breath like pranayama breathing – a set count of breaths in and out or through alternate nostrils – to maintain some of the sounds, and that has the same positive effects on the brain and body as the slower, deeper breathing,” Medalye says.

She has researched the properties attributed to each gemstone through ancient mythologies, sacred texts and cultural folklore. For instance, rose quartz has symbolized love and devotion since Aphrodite purportedly tore her flesh on thorny bushes in her futile attempt to save Adonis, and the Earth absorbed a few drops of her blood.

“The historical interpretations have filtered down into general beliefs about what each stone offers energetically,” Medalye says. “For instance, Catholicism has valued amethyst for elevating people towards the Divine and that belief took hold in India when gemstone malas were introduced there from the West.”

Medalye works intuitively. “The elements find each other,” she says. “For instance, a lotus pendant reminding us that beauty emerges from even muddied waters goes well with pearls of hope and love.”

Her website outlines each gemstone’s metaphysical properties. “But the first item that attracts you is generally what you need,” she says. •

Sasha Rogers starts each blank canvas with a horizontal line across the middle and spends a lot of time getting...

Dalia Lash, director of MARK LASH Fine Jewelry in Toronto, feels most at home behind a counter filled with sparkling...