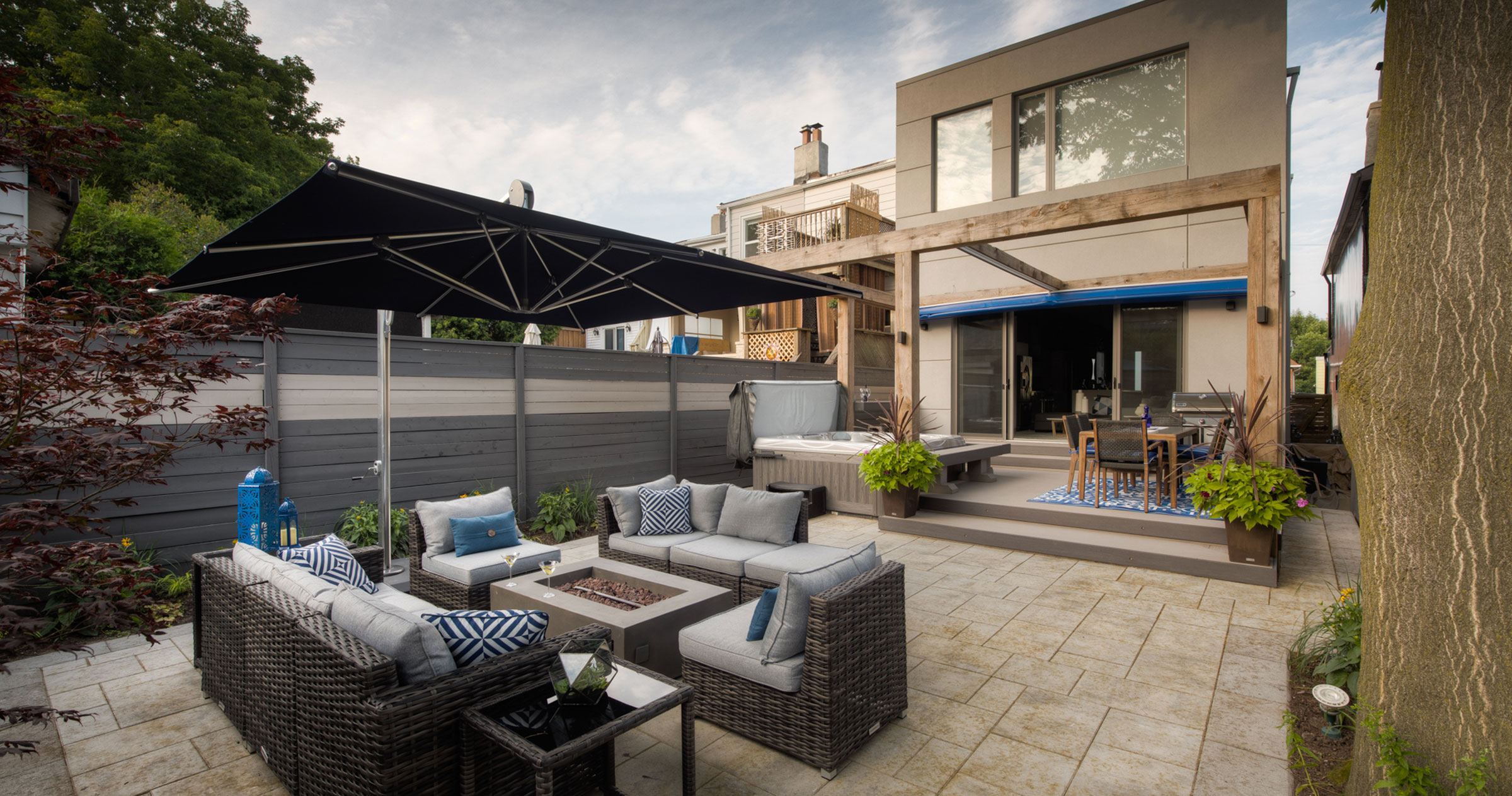 A long, narrow backyard in The Beaches gets a makeover to become an alluring outdoor space

Photography: Jeff McNeil (After) and Miro Simecek (Before)

The recherché Beaches area of Toronto is replete with quaint examples of early 20th century architecture. With its distinctive modern edge, the front facade of this recently built home stands out from those around it.

But this home has one thing in common with its neighbours: A backyard corseted by a very narrow lot, measuring a restrictive 25 feet wide by 110 long. Much of that area was taken up by a beautiful mature maple tree and patchy stretch of lawn, the latter of which proved problematic. “There is so little space between the houses, the owners had trouble getting a lawnmower through,” says Miro Simecek, owner of Royal Decks, a deck construction and landscaping company with several offices in the Toronto and southern Ontario areas.

And the couple who live there, professionals who love to entertain, had no outdoor elbow room for guests. The existing tiny and basic cedar-plank deck could accommodate a modest-sized barbecue and only one chair. Simecek, who has been masterminding outdoor spaces for more then 13 years, drew up a plan that would extend the deck to the full width of the home. Making the most of the large sliding patio doors, he knew, would optimize the indoor-outdoor flow that is so important to homeowners these days.

His new plan made room for not only a dining table, but a small bar area as well. And it gives pride of place to the owners’ must-have: a hot tub. “Hot tubs are making a big comeback,” says Simecek. “We get 10 times more calls for them than we did four years ago.” It was placed near the door to make for a quick dash from indoors to take a warm plunge in cold weather. Slightly sunken, the tub was given a surround to enhance the spa-like look.

Since low-to-no maintenance was a priority for the homeowners, the deck is constructed of a PVC product by Azek. Not only on-trend, its warm grey colour harmonizes seamlessly with the home’s back facade. The light shade chosen will not become as heated when exposed to direct sun, Simecek says, nor will it show footprints or mud as much as a darker shade would. “But we did add a darker shade of the same material as an edging,” he says. “It added depth and visual interest to the design.”

The couple wanted to make the most of available sunlight but still have some shade.  The designer devised a pergola-like structure made of wide, slightly rustic wood posts. Spare and linear, it harmonizes with the home’s architecture. Along the top, discreet metal tracks accommodate a blue retractable awning that can be extended to shelter the deck from rain or full sunlight. Low-voltage and programmable lighting, including light fixtures affixed to the posts, help set the mood in the evening.

The homeowners have no use for a lawnmower now, as paving stones run from the deck to the back fence. To create a seamless visual flow from the deck, Simecek chose soft grey concrete pavers from Permacon’s Melville collection. “We kept a very linear look,” he says, “with flat, plain slabs arranged in an uncomplicated layout, in keeping with the contemporary look.”

A gas firepit was also installed, perfectly situated to create a conversation area. Flanking it, two long and narrow flower beds accommodate some easy-care greenery. A Japanese maple tree was also planted along the rear wall.

Although it was still in good condition, the homeowners considered the original high wood fencing a glaring eyesore. Simecek’s simple solution: paint it to harmonize with the rest of the earth-toned palette.

“Because of the way we designed it and the materials used, the owners need not do anything to the rest of this backyard for many, many years,” he says. •