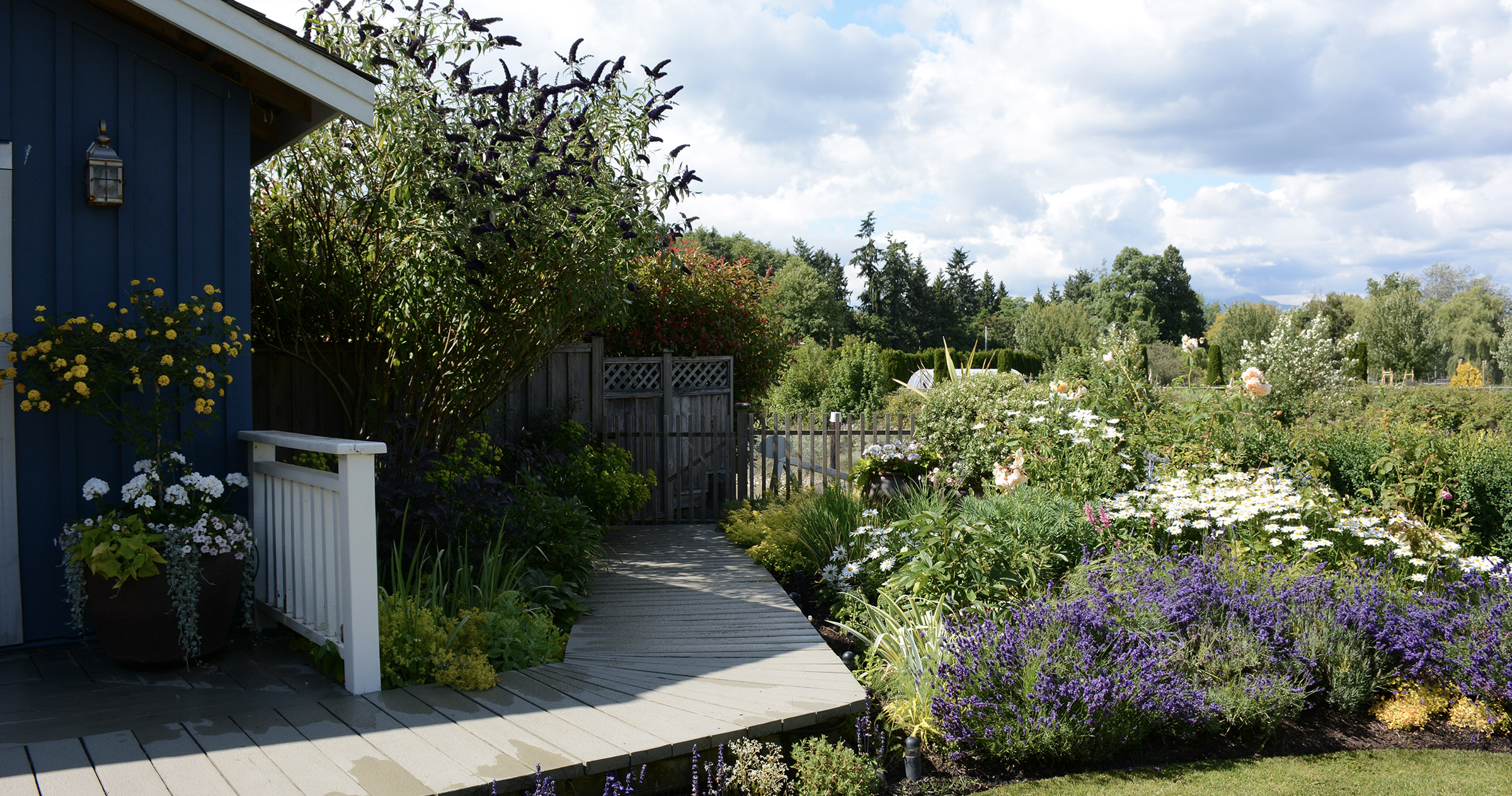 This Deering Island, Vancouver landscape on the banks of the Fraser River is lush with classic cottage-garden plants

The Small Yard was a natural fit for an English cottage garden. It backed directly onto a protected channel of the Fraser River in Vancouver’s quaint Deering Island neighbourhood and was surrounded by country-like properties. The yard was bathed in full sun and boasted a charming clapboard garden shed and wood-plank walkway that wended to the water’s edge. An English cottage garden and its dense plantings guaranteed a non-stop succession of flowers from March through October – just what the property owners wanted.

“The cottage style really suited the space and the clients,” says Glenna Partridge, the Vancouver garden designer who created the garden in 2012 and has been adding new and interesting flowering plants to it every year since. “It’s quite a tiny garden but it has layers upon layers,” she adds, enthusiastically. “There’s always lots blooming.”

While her clients gave her carte-blanche on the design, she explains, they did ask for one thing: Flowers, flowers and more flowers.

To that end, Partridge says, she chose and planted hundreds of flowering plants of various heights, shapes, growing styles and bloom times so that the homeowners, who spend their winters in California, would, upon their return home in March, enjoy a succession of blooms – waves of pinks, blues, purples, whites and yellows – into the fall.

As is the case with most cottage gardens, the overall look is a casual tumble of flowering plants, haphazard almost; but the informal appearance belies the planning that went into the landscape. For structure, the designer says, the borders were widened around the yard’s tiny patch of lawn to create space for an array of shrubs and flowers, the heights of which are staggered. A Japanese maple was planted close to the house to create a leafy canopy that gently shades the patio. Broadleaf shrubs, which remain green year-round, were another important addition to the borders. Their foliage fills the space once the flowers finish. Camellia japonica, a broad-leaf evergreen with rose-like pink blooms, fills that bill along with boxwoods.

Tall earthenware pots were placed throughout the garden, including one on each side of the garden shed’s French doors, drawing the eye up and providing further interest. Alongside the shed, Buddleia davidii, a flowering shrub commonly called butterfly bush, is underplanted with sedums, irises, grasses and a few annuals.

“People think you just plant a bunch of plants and it’s a cottage garden,” says Partridge, the owner of the eponymously named Glenna Partridge Garden Design, a firm she started more than two decades ago. Cottage gardens are wonderful, she says, because the dense plantings limit the exposed soil, reducing the need to weed. And the close proximity of the plants cuts down on the need for staking. “But with any cottage garden,” Partridge says, “it’s about coordinating your blooms.”

In this garden, spring begins with tulips, narcissus and crocuses, all of which are planted in the earthenware pots. They are soon followed by hellebores – in pinks and whites – which pop up in the borders in late February or early March and stay in bloom until the end of April. It isn’t long before the arrival of euphorbia, which bears chartreuse-coloured flowers. After that, there’s soon fresh foliage in the form of dozens of hostas in various varieties, and hebes, an interesting but often-overlooked evergreen shrub.

In addition to flowering shrubs and perennials, Partridge says, she relies on annuals to add even more colour and interest. Coleus, purple fountain grass, Love-in-a-Mist (voracious self-seeders with white, pink and corn-flower-blue flowers), ceanothus, calibrachoa and agapanthus are among the annuals she uses in this garden. Gardeners with healthy plant budgets can also use tropical plants, she says, noting that lantana, a fragrant flowering plant with umbel-shaped blooms, is often on her list. She says cottage gardens offer homeowners an opportunity to experiment and reap spectacular results. •