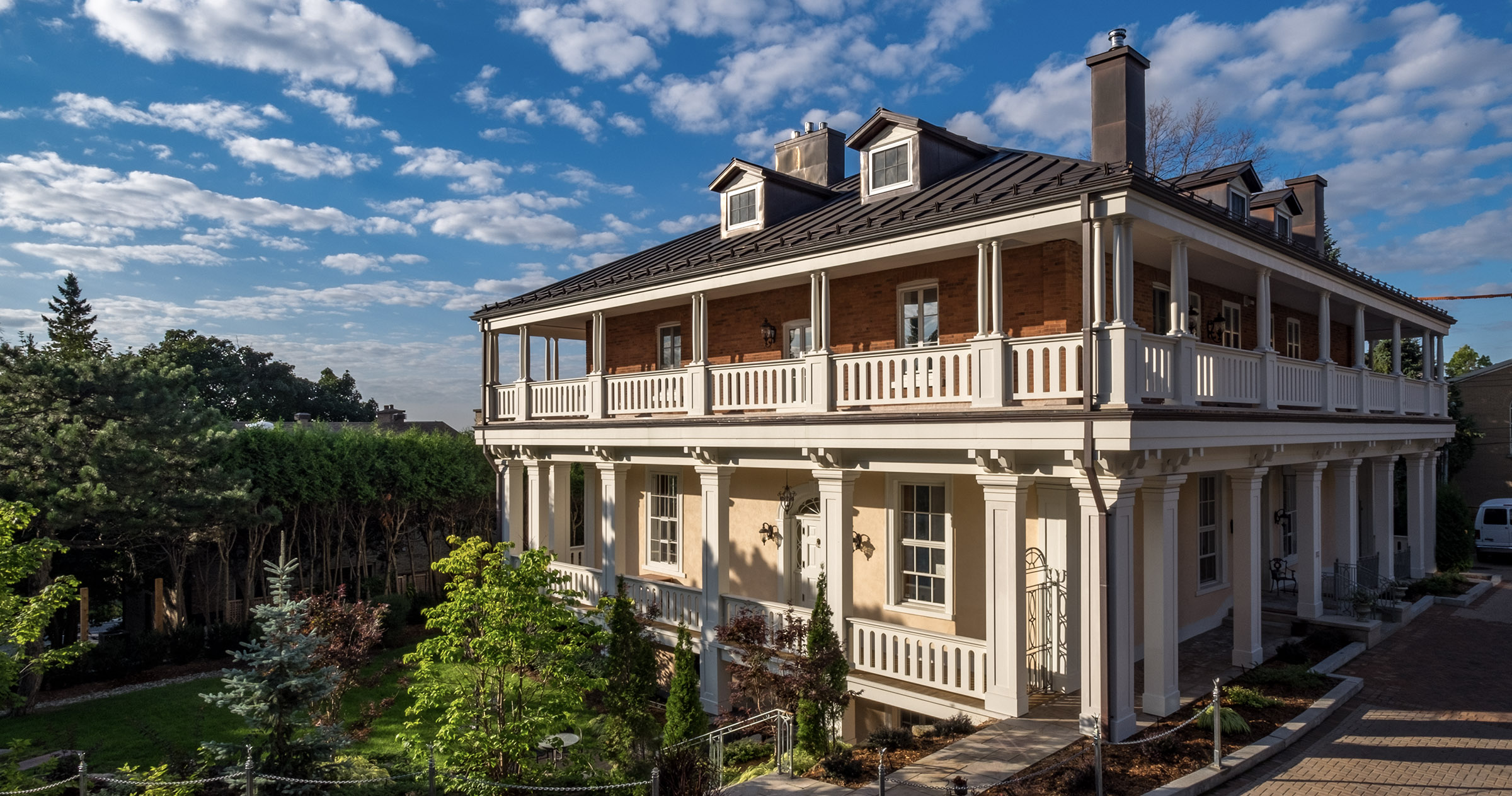 A Grande Dame is Back in Her Element

A historic Montreal Island home gets the landscape setting it deserves

Once upon a time (1847), high on the slopes of Westmount, a unique house was built: a Regency-style plantation home. This architectural grande dame featured wraparound balconies that afforded it sweeping vistas over its land on all sides, with the most spectacular view down the hillside to the St. Lawrence River. Over the next century and a half, its fortunes rose and fell – mostly fell, alas, as alterations and neglect of the house and the sell-off of surrounding land left it, ultimately, a raddled old dame in tight quarters.

That old dame was rescued 165 years later by a devotee of architecture and design and, after several years and much effort expended, once again looks truly like the grande dame it is. But what to do about the severely reduced land surrounding it? The homeowner hired Myke Hodgins, principal landscape architect at HETA (Hodgins et associés architectes paysagistes), to make the setting worthy of the home.

“It was a challenge,” says Hodgins. “This magnificent house had had nearly all its property sold off. There was just a front little strip of land, with the sides the same. What had been a beautiful garden was just vestiges of leftovers of the property.”

The landscape architect and the homeowner decided to make “a series of beautiful spaces that would make a necklace around the house,” as Hodgins describes it.

On the approach up the driveway, which ends in a brick-paved courtyard, the scene is set. “We used pavers to create an exterior vestibule, so the driveway looks more like carpet than asphalt,” Hodgins says. “The clay brick pavers are made for this climate, and there’s a richness to their colours.”

To the east side of the house, which is bordered by the driveway, the ground slopes down. The true height of the house is revealed in the windows of the finished basement. For some reason, the grounds had been built up and they covered nearly all of the basement windows by the time the current homeowner bought the house. Discovering windows behind walls in the basement, she had the entire perimeter excavated to reveal them. This makes the garden seem even more sunken and private.

“I’m really proud of having uncovered those windows,” she says. It not only restores the original design of the house; it also makes the basement a thoroughly liveable space.

Down some steps from the driveway, the homeowner has what she calls her “English garden” – a small round patio snugged up against the boulders of a retaining wall and close to the side of the house. Hodgins notes that “the English garden looks English in that it’s casually planted, but it’s actually strategically planted to look soft and natural.” It makes a quiet little area for relaxing alone or with a friend.

On the long, south side of the house that looks down the hillside toward the St. Lawrence River is the main entertaining area, a large terrace. The principal access is from the living room through French doors onto the lower porch, then down a few steps onto the terrace. “It’s a graceful way of getting into the landscape,” says Hodgins. “It makes the space not feel small. We played with the psychology of the design, to create a bit of mystery.”

Along the other short side of the house, the west side, is the swimming pool and cooking patio. “My favourite aspect of the garden is the pool,” the homeowner says. “I’m in the pool every day in summer. I love it.”

She describes the outdoor kitchen as “perfectly functional. It has a sink that works. It has a barbecue that works. It has even a tiny little fridge.” She adds wryly, “Somebody who is actually a cook would love it” and then continues “I’ve had dinners there that were marvellous.”

The patio features a spectacular concrete table with a multicolour mosaic surface, which the homeowner bought at an arts festival in Salt Lake City. “That table is fabulous. It has a place for ice and it has a Lazy Susan. It cost more to bring it from Utah than the table itself cost,” she says with that amused wryness again in her voice.

The actual landscaping was done in earnest in 2018, but the current plantings are already revealing the welcoming space that the garden will become in its maturity.

The homeowner is allergic to bee stings, so there are no flowers except for lilacs. “In spite of my allergies, I cannot bear to live without lilacs,” she says.

Other plants are mostly evergreens or colourful shrubs and trees, including Japanese maples. “We played a lot with colour and textures of foliage,” Hodgins says. “As things were discovered and opportunities were seen, the original design evolved. It’s a cool living space.”

The homeowner agrees: “It’s a great backyard,” she says. “I like that it’s divided into purposes because those are otherwise challenging spaces – they’re very narrow.”

When her elder son got married last September, the homeowner had several appealing spaces for outdoor entertaining. “I had a shower for the bride one afternoon, and it was lovely. Then I held a brunch the morning after the wedding. The caterer loved my outdoor kitchen, and everybody had different places to eat.”

Harking back to the idea of adorning the grande dame that is the house, Hodgins says, “Each jewel on the necklace has its own specific identity, and it all fits and flows together.” •

The Superhero in the Garage