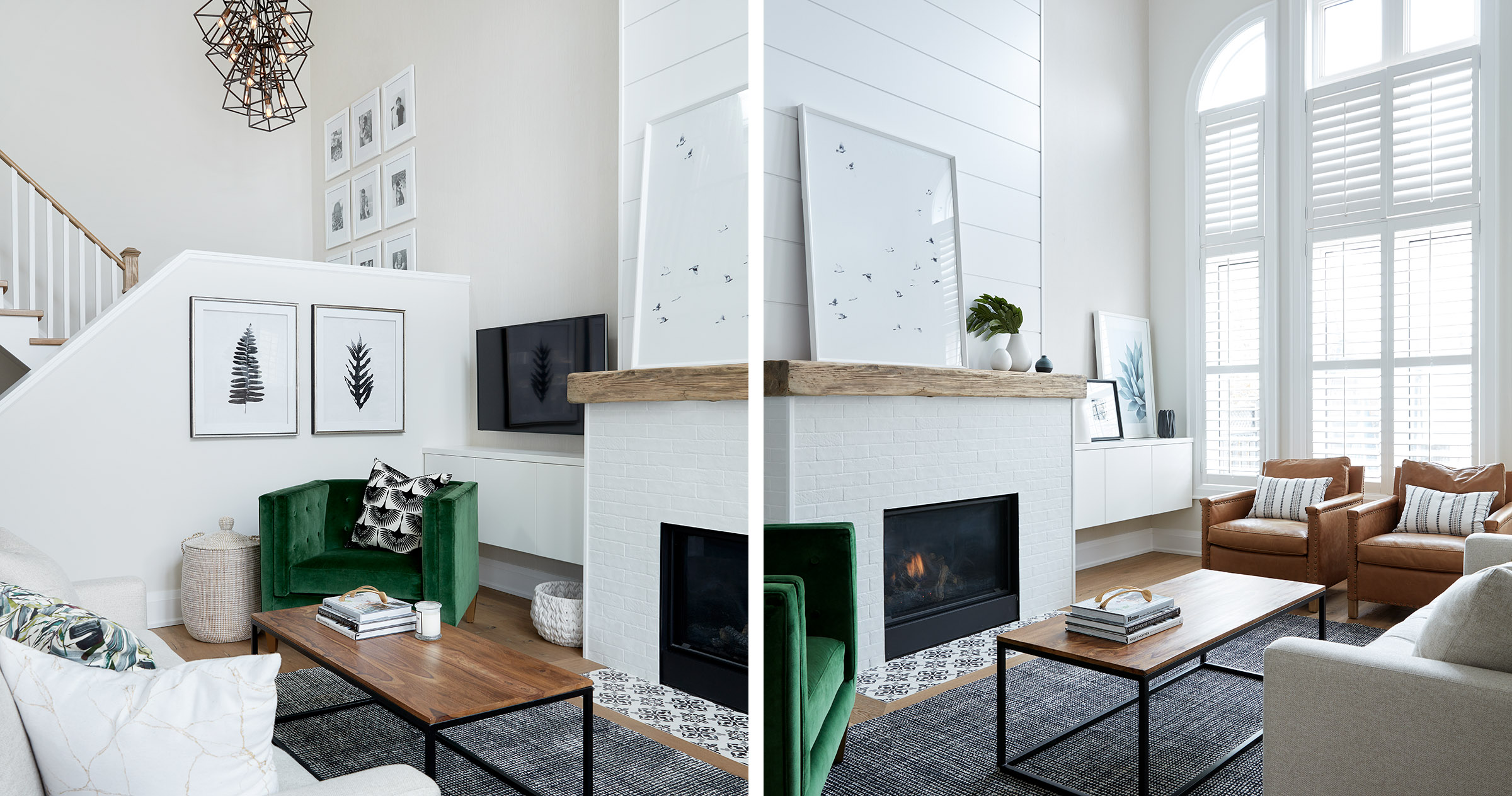 Here’s an unusual dilemma: people not needing a larger home and not looking to downsize, finding a place that’s modest by Canadian standards, and wondering “How are we going to fill this?”

The fact that Rebecca Travis and Tim Prince and their young son were coming to Oakville from England explains it: affordable dwellings in London and environs tend to be much smaller than their counterparts in Canada.

The family arrived from London, with no furniture, in 2012. They looked around and found this property, with a builder-basic interior, in the West Oak Trails area.

“We couldn’t find exactly our style, so we chose a place with a good footprint and good light,” says Rebecca. “My husband really loved the living room with its double-height ceiling. I loved the light. The layout was great in terms of open concept, and I like the dining room to be somewhat closed up [as it already was]. The plan was to save and then make it feel like ours.”

With two storeys, and a finished basement, it was most definitely larger than what they had been used to in London. They settled in, bought some furniture, had a second son and started putting down roots in the community, but the house was, as predicted, never quite the home they wanted.

By 2016, Rebecca and Tim were ready to start planning a renovation. “All the years we had lived here, it didn’t feel like us,” Rebecca recounts. “I had lots of ideas but not a lot of knowledge of where to find things. I didn’t know where to begin. I like a clean, almost Scandinavian style, but we have kids and don’t want to live in a museum. We wanted it to feel homey.”

Through a common acquaintance, they were referred to interior designer Erika McCarthy of Baudit Interior Design. Along with designer Sylvia Porter, McCarthy and Rebecca and Tim discussed the possibilities.

The renovation began in 2017, with McCarthy having identified several necessary changes. “The foyer was small and there was a larger open space off it and outside the dining room,” she says. “This space was impractical and not well used. We enlarged the foyer and created an office nook.

“The living room was unimposing, with a poorly placed fireplace. Also, the dining room had dark wallpaper, and a wall with a cut-out facing the stair. We opened the wall entirely where the cut out was.”

Upstairs, McCarthy noticed that the master bathroom had a “tiny corner shower and a huge corner tub.” The bedroom lacked adequate closet space.

The reno involved strategic demolition work. In the foyer, the Baudit team blew out the closets, a knee wall and a decorative column. They added a custom built-in closet and extended a side wall to separate the desk area/den from the foyer. The front entrance configuration was changed from double doors to a single door with side lites and a transom, letting more light into the space.

In the dining area they opened the cut-out to shorten the wall, removed the dark wallpaper, added crown molding and painted the ceiling a rich teal. “The green in the dining room was my idea,” Rebecca says. “I wanted something bold.”

In the living room, they removed an awkward corner fireplace and installed a new, centred gas one with a mantle. The designers built out the wall above it to create a dramatic but calm over-mantle with white shiplap. The shiplap and white bricks are separated by a rustic reclaimed-wood beam, hand-picked by McCarthy and Porter, which adds a touch of Canadiana and a warm accent to the room. Built-ins on both sides of the fireplace take care of toy storage.

The master bathroom saw a major change, too, with both a good-sized bathtub and a generous shower enclosure.

The bedroom’s walk-in closet was removed and its space was added to the new ensuite bathroom. “We lost a walk-in closet but added built-ins along the master bedroom wall,” says McCarthy.

Adds Rebecca: “I was willing to give up a bathtub for a great shower, but ultimately we went with a bathtub and I’m so glad we did. It’s my little oasis.” She has fond memories of the fully-dressed McCarthy in the proposed bathtub, reaching up to make sure that it was sited correctly so that she could easily deposit the imaginary wine glass in her hand onto the wall ledge above.

In the bedroom, the wall of built-in closets occupy space, but it was nearly all compensated for by changing the orientation of the bed.

Changes large and small were made throughout: new furniture and rugs, engineered European oak hardwood floors, handsome tiles in the foyer and on the hearth, updated lighting, new wall colours, scraped-off popcorn ceilings, new window and door casings and the larger, English-style baseboards that Rebecca so missed. The designers sourced each piece of artwork and furniture and all accessories. “We pulled everything together, which was an important part of the project for Becca and Tim,” says McCarthy.

She is pleased that the home’s interior now looks integrated rather than a mish-mash of items and rooms. “The living room ties into everything else, and it looks like a fully finished, thought-out space,” she says. “[It’s] not overdesigned; it’s thoughtful and it makes sense and it’s practical. It’s a very comfortable space.”

Rebecca agrees with her designer: “We love when we come home,” she says. “We turn onto the street, and come in, and it feels 100-per-cent us.” •

Elite collection Have you ever tried to sleep while your significant other is rattling hangers and noisily burrowing in closets...