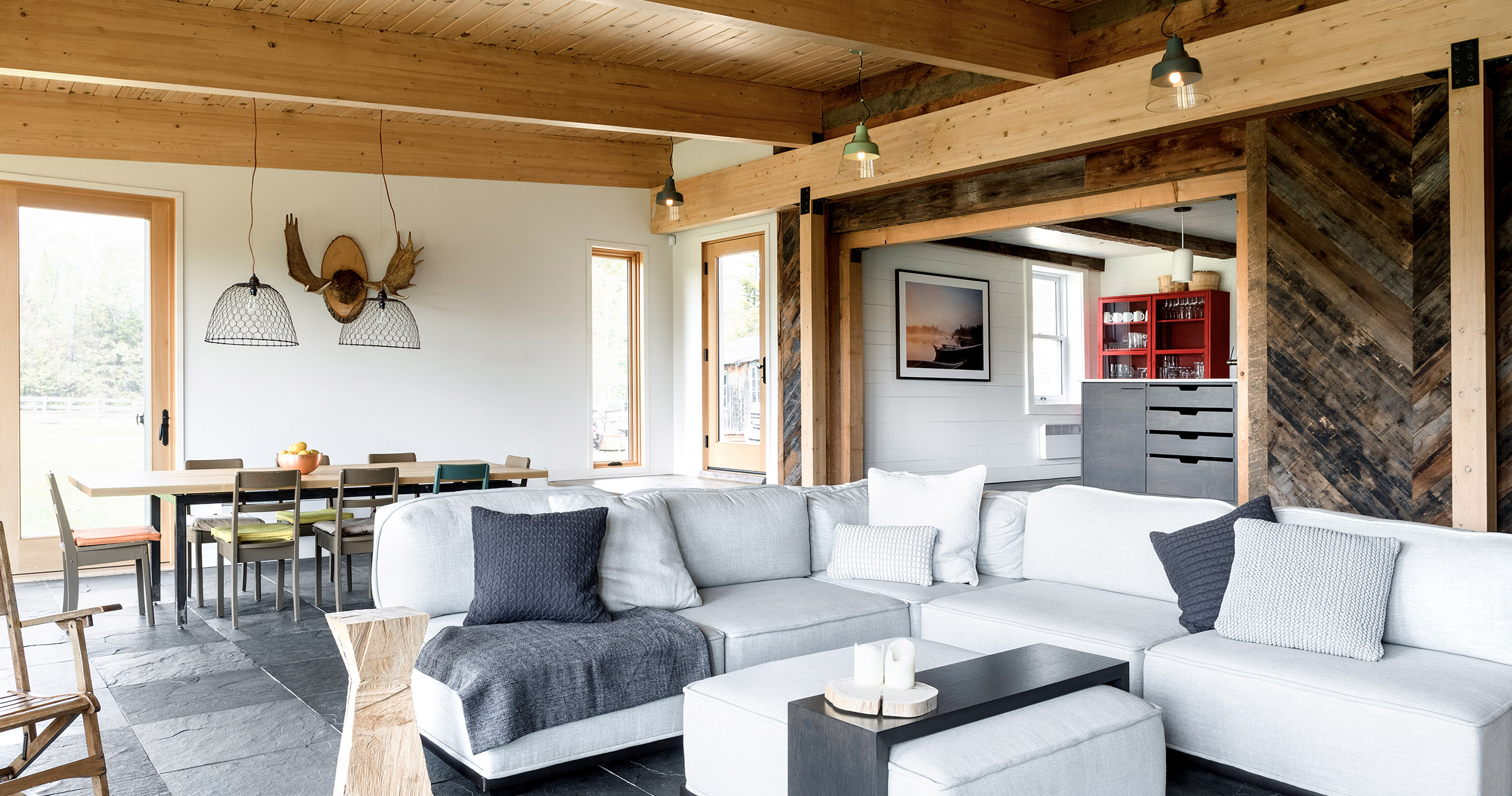 An architect transforms his 19th-century farmhouse into a modern, rustic retreat

Perched on a sprawling wooded property in Saint-Raymond, about 60 kilometres west of Quebec City, a 149-year-old farmhouse begged to be reborn. Upon the birth of his son Léo in 2013, homeowner and architect Michel Gingras decided it was time to update and expand the cottage, which he’d bought with his brother Marc in 1995.

“Léo’s birth brought the whole family together, and suddenly, the house changed from a ‘chalet d’amis’ to a place where everyone – my siblings, my parents – wanted to gather,” recalls Michel.

As a partner at STGM Architectes in Quebec City, Michel had often collaborated with IDEA’s associate designer Elsa Vincent and her team on commercial projects, and it was to her he turned when he envisioned the new family oasis. He wanted to retain the property’s 1870 charm, while adding much-needed open space and modern amenities.

With land spanning 1.7 kilometres, including fields for his horses, Michel had plenty of room to double the farmhouse’s living space. Construction took about four years’ worth of weekends with Michel and Marc doing the work.

“We kept the essential parts of the old house, such as the original wide-plank pine floors, but built an extension, because the rooms were very small and dark,” Michel says. “The whole house felt closed-in because a large canopy outside blocked the light.”

Digging down to maximize the ceiling height, Michel and the IDEA team created a large, airy living and dining area adjacent to the old kitchen. Featuring heated slate floors, a cozy wood-burning fireplace, an eight-foot-high wood-clad wall, and glass patio doors that open onto the horse pasture, it’s a space that draws people in. “When we look out the back, it’s incredible; it’s one of my favourite spots in the house,” says Michel. “We chose mostly natural materials where possible. For the elevated floor connecting the kitchen and the extension, we used leftover planks from the old deck’s roof, and the barnwood herringbone wall is crafted from the wood we kept after demolishing the old canopy.”

The team also salvaged and stripped the home’s interior columns and beams, which add rustic texture. The original attic was taken down to create a cathedral ceiling.

“We didn’t want an ultra-modern cottage devoid of personality, so we also saved some furniture to keep the authentic chalet vibe throughout,” adds Vincent, who integrated the dining room chairs and the kitchen’s red armoire into her design.

The farmhouse’s kitchen was reconfigured and beefed up structurally so it could be opened up to the new living space. Quartz countertops and sleek wood cabinetry crafted by local artisan Pierre Lainez added more storage within the same compact footprint, while the white shiplap walls and ceiling enhance the cottage feel.

“We made an open staircase so that the light from the back and front of the house could filter in,” says Michel. To disguise the chimney in the middle of the kitchen that rose through the top floor as well, the designer clad it in white slats, making it an attractive design feature.

The old house had just one tiny bathroom, so Michel created a shower room and sauna within the main floor extension. “We created different zones – a toilet area, a sink area, a shower area and a sauna – so everyone can do their thing,” he explains.

Upstairs, the challenge was to squeeze four good-sized bedrooms into a small area, says Vincent. “Because of the space itself and the angles of the roof, we had all the furniture built so we could maximize every inch,” she says, noting that each bedroom features a storage loft for seasonal items.

Throughout the home, the IDEA designers chose to purchase or build local furnishings whenever possible. “We try to choose local products first, even in commercial projects,” says Vincent. Everything, from the headboards to the kitchen cabinets to the sectional sofa in the living room, was custom-made,” she says.

Now, with 1,900 square feet, the restored farmhouse can accommodate Michel’s large extended family. He and Vincent managed to keep the true essence of the historic house while tailoring it to everyone’s modern needs.

“This is an amazing space, secluded from everything; it’s peaceful,” Michel says. “When I look out at the horses, I feel like I’m miles from civilization.” •

All In The Family