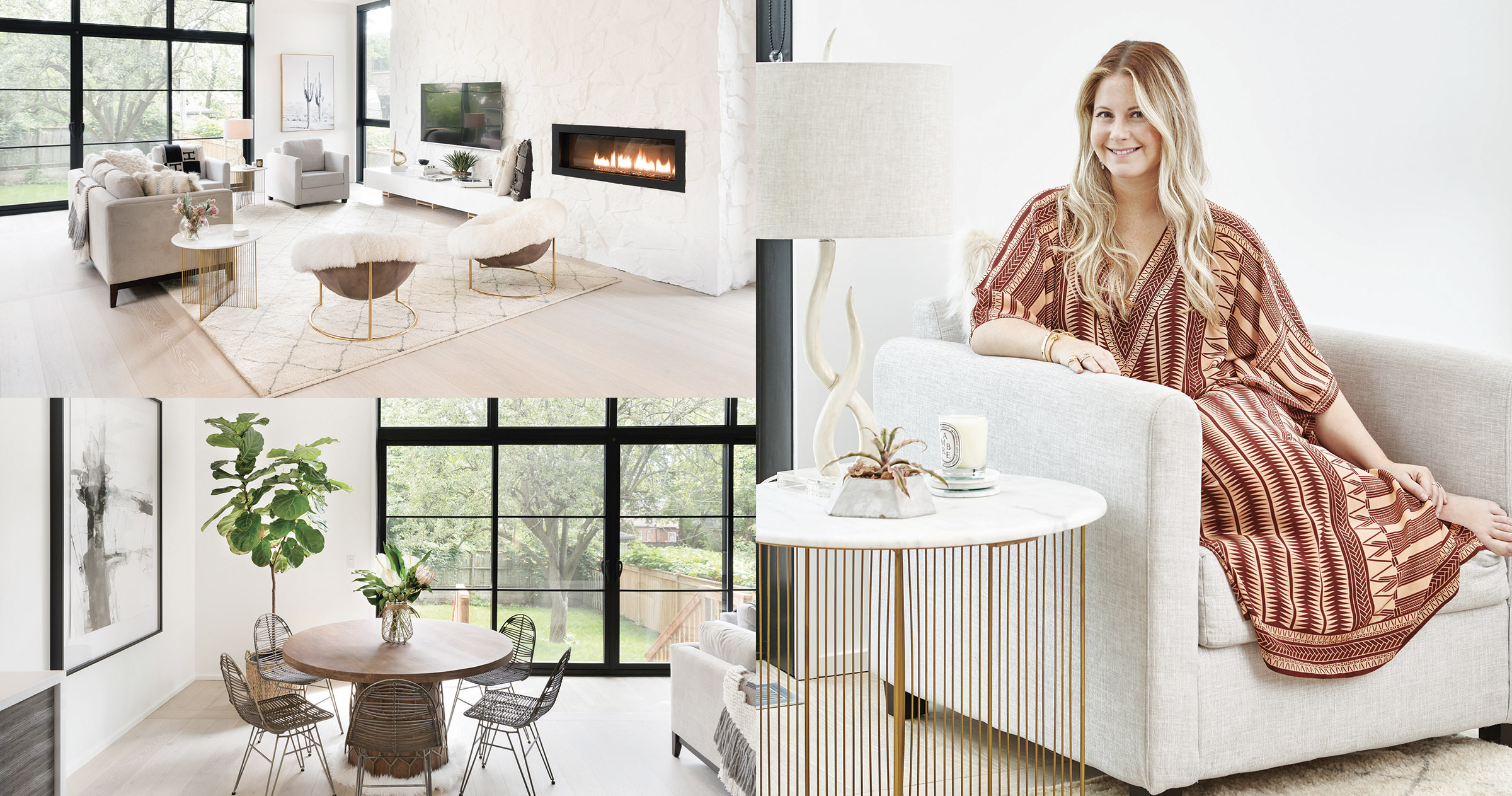 Erin Kleinberg, former fashion designer and current advertising agency executive, had a vision.  What her mind’s eye saw was her tiny Toronto cottage transformed into an oasis of Palm Springs chic. It’s a look embraced by such international designers as American Jonathan Adler and Australian Greg Natale, refined and minimal with a touch of old-Hollywood glamour.

Erin had a walk-though of such a home as co-founder of style-and-culture website Coveteur. Among the more than 500 international style-setters she interviewed in their homes was Canadian stylist Karla Welch. “Her Los Angles house blew me away,” Erin says. “It felt so chic and modern, so open and airy, yet also cottagey and rustic. I wanted to recreate all those things in my own home.”

Beyond trendiness, the relaxed mid-century style of southern Californian homes also holds good associations and warm memories. As a child, Erin spent every Christmas with grandparents who lived in Coachella Valley, and she and husband Mickey Lungu, a corporate lawyer, were married at The Parker Palm Springs. The couple named their toddler daughter, Parker, after the swank boutique hotel.

After a long search, the couple finally found a promising property with a large lot. The neighbourhood was a familiar one for Mickey, who had lived nearby as a child. But at 800 square feet, the “cute cottage” was impossibly small. While pondering options, they moved into Erin’s old room at her parents’ home in nearby Richmond Hill, newborn baby in tow, for more than a year.

They worked with builder Adam Rothschild of Rothcon Fine Homes Inc. and architect Brenda Izen, principal at Izen Architecture, to expand the square footage to 3,200 square feet. Additions to the second storey and rear of the home made it possible to have five bedrooms and plenty of head room. “To create Erin’s light-and-bright Palm Beach vision, we went with as open a floor plan as possible, and 10-foot-tall ceilings on the main floor,” says Izen, head architect on the project. The look also called for an all-white colour scheme and wide-plank white oak flooring throughout the home.

To update the mid-century aesthetic and maximize the amount of sunlight, the architect employed a creative approach to window placement. On the main floor, very thin vertical floor-to-ceiling windows accomplish this and help define the living room from the dining area. As well, one of the two tall (close to 10 feet) doors on the ground floor has a corrugated glass panel. A skylight feature over the stairwell floods the second floor with light.

“I particularly like the kitchen because it typifies our collaboration in designing this house,” Izen says.  “It reflects both our styles.” After much back and forth, the pair agreed on an artful mix of textured surfaces. The smooth expanse of high-gloss white cabinetry contrasts with lower cabinets that are faced with a weathered grey reclaimed barn board. The range hood and island are covered with painted shiplap. Stage centre, the clean lines of the imposing 11-foot-long island provides a place for this “open-door policy” couple’s many guests to gather around.

Erin’s hands-on approach to the home’s design took a literal turn with the living room fireplace. She used close to 300 stones, collected during trips to the Muskoka region; they were affixed to the surround and painted to harmonize with the rest of the all-white colour scheme. “It’s so unique and reminds me of the stonework on Palm Springs homes while also honouring our cottage’s roots,” Erin says.

The powder room was a very personal project for her. She intentionally set out to create something “fun and punchy,” in high contrast to the calm and neutral space around it. The walls are covered with a lively botanical wallpaper she first saw in the Beverley Hills Hotel. Considered an unusual choice by some, the custom vanity’s green marble tiles were inspired by a trip to one of the Céline fashion house’s trendy stores.

The powder room’s gold accessories are echoed in almost every room of the house: light fixtures, cabinet handles, wall sconces, mirror frames. This warm precious metal is having a moment, trend-wise. “I’m not a person to just go with something because it’s a trend,” says Erin. “I go with my gut, and then it becomes a trend for me.”

To escape the demands of running the all-female advertising agency she co-founded, Métier Creative, Erin heads to the second-floor master suite. It was all about creating a private compound of grand hotel proportions. The master bedroom measures 19 feet square, a fact that has made her the butt of a few jokes. “I remember when I was growing up, my parents had a large bedroom with a fireplace, and it was just the best place in the world to hang out in on a rainy Sunday. I wanted my family to have that, too,” she says.

She loves the “killer” beams clad in reclaimed hemlock from an Ontario supplier. And the 14-foot vaulted ceilings give the sense of being under an open desert sky. Unused to such wide-open spaces, she found that the sensation disturbed her rest during the first night in the home. Now, Erin and her husband sleep very well there, though at times it all feels a little unreal. “We will wake up in the morning thinking ‘How is this our bedroom? How is this our house?’ ” she says. “In the end, it really is a dream come true.” •