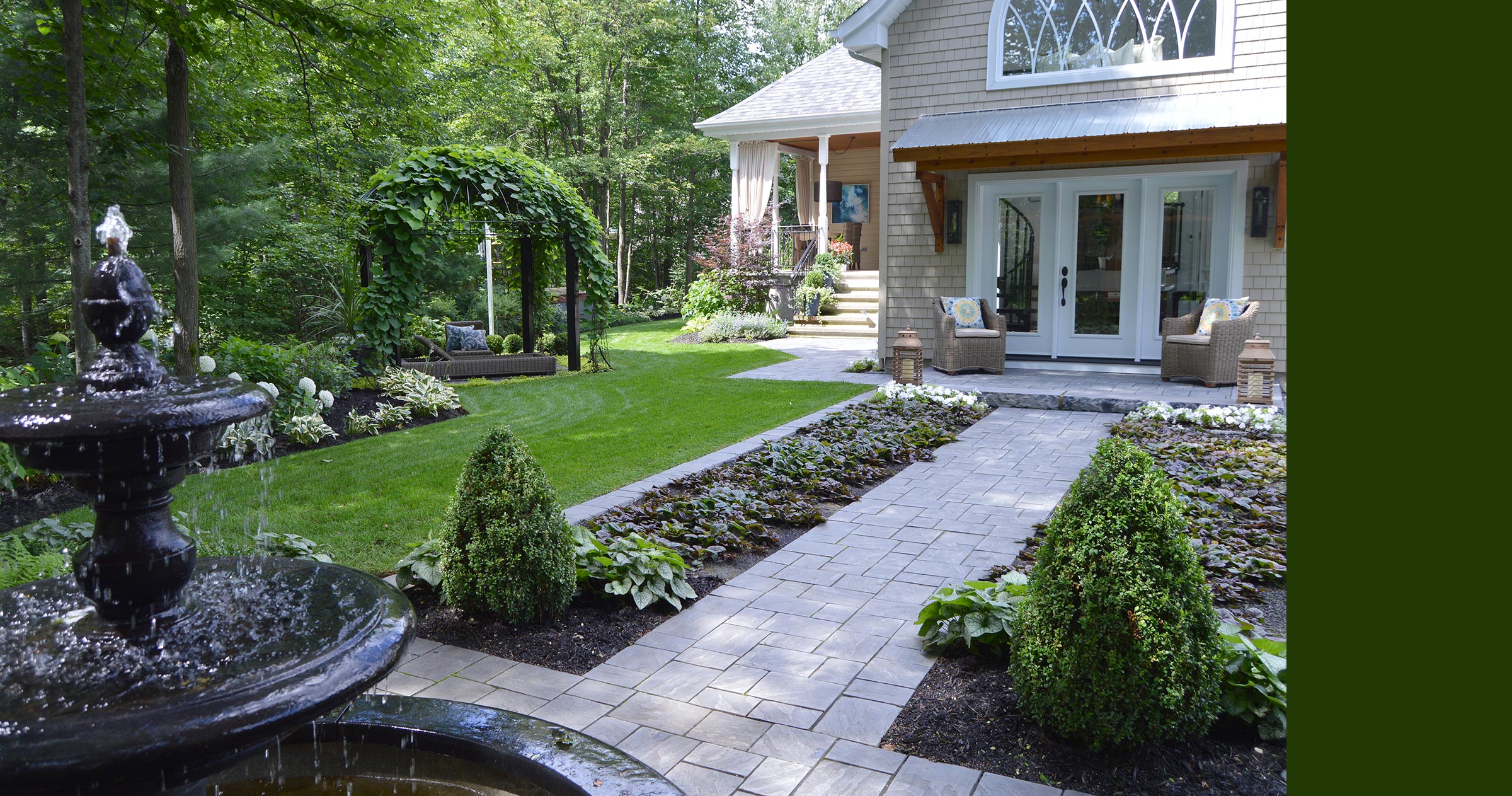 Despite its modest dimensions, this garden has elements found in classical European landscapes

Grand gardens can come in small packages: A stately new garden created on a residential property in Terrebonne, a suburb on the northeastern edge of metropolitan Montreal, is a case in point. Featuring a two-tiered water fountain, a formal promenade, and mass plantings of perennials, the garden has a simplicity and elegance more commonly associated with an estate property than a typical suburban home.

The home’s owner, an interior designer and world traveller, wanted a garden that would mirror the refined style of her own home’s interior, as well as the design of historical gardens that she had visited in France and Spain. Classic gardens such as those offer different views and sensations from multiple angles—day or night.

Tatiana Povereny, a landscape designer with Terrebonne-based Prestige Paysage and the designer who created the new garden, transformed the suburban yard with stone pathways, framed garden beds, spot lighting, and a stunning two-tiered black concrete fountain (from Campania International) that is the garden’s central feature.

Making things a little easier, she says, was that the yard was a relatively blank canvas, and had dozens of mature trees, including several stunning white birches on its perimeter. The organic simplicity served as a natural backdrop for the new garden as well as providing privacy.

Since the client worked from home in an office located on the main floor of an addition jutting out from the back of the house, Povereny says, it was important that the new garden provide spectacular views, even when the homeowner was working.

For this reason, she adds, the new garden’s central stone walkway starts at a small raised patio platform/seating area that abuts the exterior doors of the homeowner’s office; the walkway leads straight through the garden to the fountain at the far back of the property.

Mass plantings of Ajuga reptans (a ground cover also known as bugleweed), impatiens, and the blue-flowering perennial Brunnera macrophylla (Siberian bugloss) that run in long beds flanking the full length of the path turned what would otherwise be an ordinary walkway into an impressive promenade.

In addition, the pathway encircles the fountain, which is a focal point, amplifying that space and the impact of the water feature. Povereny says cedar hedging is often used to create privacy, but in this case, there was insufficient sunshine for cedars. Instead, she says, nine Aristolochia vines were planted along the screen to create a green wall. The deciduous vine, also known as Dutchman’s pipe, has striking green leaves and can climb 20 to 35 feet.

Creating further interest, a stone pathway running at 90-degree angles off one side of the main promenade leads to a side garden, a 10-by-seven-foot bed of loose river stones that are surrounded by three ornamental trees: Catalpa bignonioides ‘Nana.’ The catalpas are planted in individual seven-by-seven-foot boxwood hedge squares, which are lit at night.

The side garden is both a place from which to admire the wider garden and to sit and relax; a simple stone bench has been strategically placed in the space. More plantings—white-flowered Annabelle hydrangeas; Rubus, another flowering shrub; and Gaura (an annual known as bee blossom and boasting delicate white and purple flowers)—add lushness to the greenery.

This is primarily a shade garden, so extra time was spent on plant selection. Povereny chose varieties with various-shaped leaves in assorted shades of green and variegated with white. There are few flowers in the garden, and those that are there are simple white or blue—the homeowner’s choice.

In the end, Povereny says, the homeowner loved her new garden and how it matched her vision. •