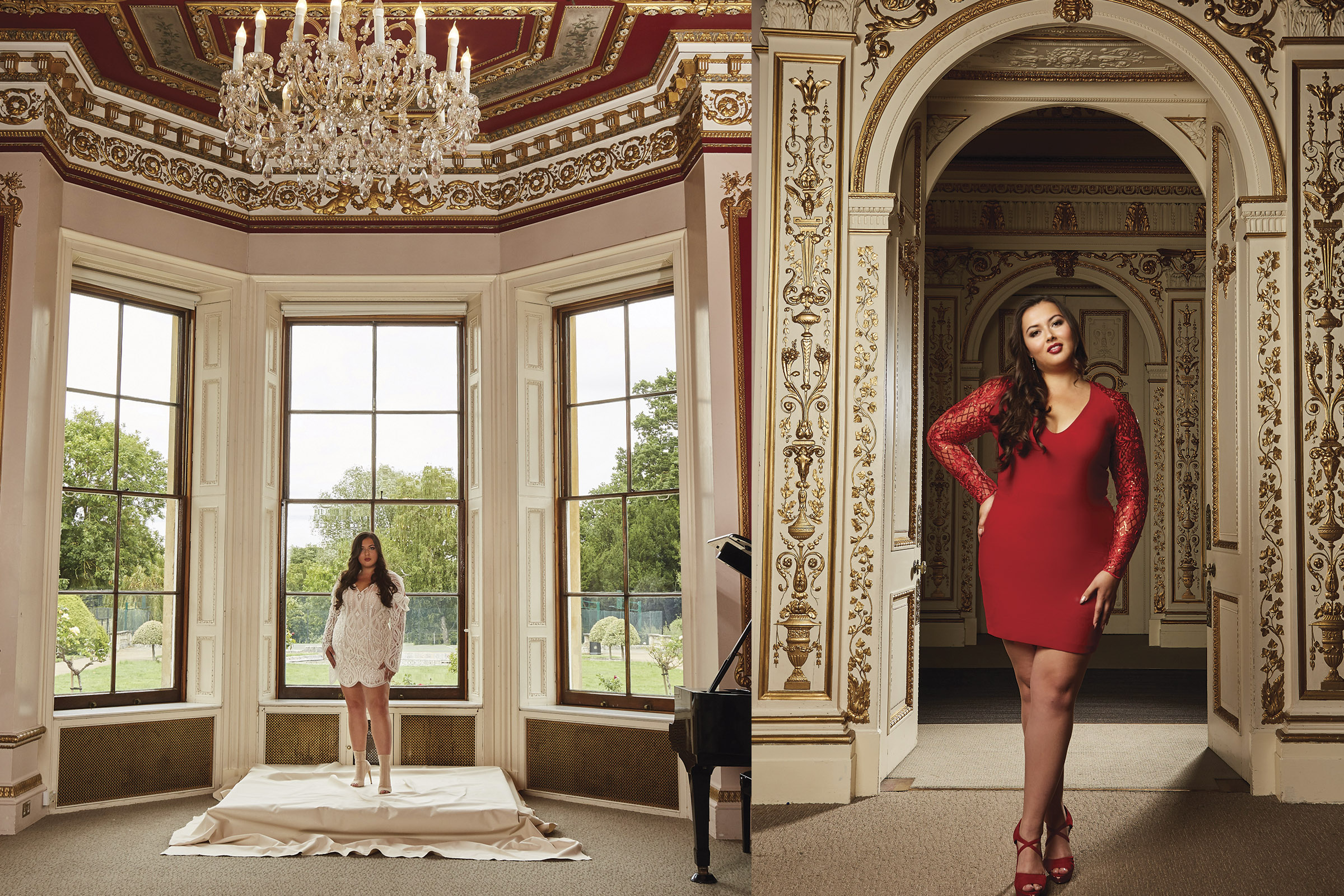 Vogue magazine editor Anna Wintour once wrote, “the content of fashion does not materialize spontaneously but … emerges from the fabric of our times.” Emerging Canadian fashion designer Lesley Hampton purposefully weaves timely and socially relevant themes into her work.

“I always start with a concept, something I feel needs to have a light shone on it,” Hampton says. “I want people seeing my shows to have an experience, to feel and think.”

For her spring-summer 2018 collection, called Sticks and Stones, Hampton sent models from various cultural backgrounds, wearing sizes ranging from two to 24, down the Toronto Fashion Week catwalk.  Among them was Adrianne Haslet, a survivor of the Boston Marathon bombing, who walked the runway on a prosthetic leg. Not only was it a strong statement about resilience, but Flare magazine’s reviewer said the designer had “set a new bar for runway diversity.”

The fall-winter 2018 collection that followed, called Lithium, was intended to raise awareness about mental health in the fashion industry and society. The designer’s special focus was bipolar disorder, which affects some of her friends and colleagues. She employed a mélange of vibrant offbeat colours to reference its mania aspect played against stark black, then finishing with silver reflective materials to represent balance and hope.

The thought-provoking themes Hampton embraces are uncomfortable for many. Yet the clothes themselves are meant to be anything but. “With every piece I design, I want people to feel comfortable in their skin and empowered,” she says. “Feeling and looking your best can be transformative, especially for women with body-image issues.”

The eveningwear and “after 5 p.m.” clothing sold through www.lesleyhampton.com are cut to enhance any woman’s natural curves, and the designer takes custom orders. There are also go-anywhere pieces, such as a quilted-sweater version of the classic little black dress, and an athleisure line, called Robust, in sizes XS to 5XL.

At the tender age of 24, Hampton has sent six collections down runways and garnered rave reviews for them. Celebrities who name her label when asked “whom are you wearing?” include ET Canada host Cheryl Hickey who has rocked her curve-enhancing evening dresses on several red-carpet occasions. So have luminaries as diverse as Real Housewives of Toronto’s Roxy Earle, competitive swimmer Penny Oleksiak, Toronto electronic music group Dragonette, and Margaret Trudeau.

Hampton says she strives through her work to make everyone feel welcome and accepted. “I also have an open mind when it comes to cultural differences, I think, because we moved around so much when I was a kid,” she says. The Newfoundland-born designer reckons her family changed country every four years or so. Her father worked in the mining industry and was posted in such far-flung places as the Northwest Territories, New Caledonia, Australia, Indonesia, and England.

It was her mother, an avid quilter, who first introduced her to a sewing machine at age four. Not all of her early efforts were successful, such as the “most fabulous teddy bear ever” she tried to make for her older brother that ended up looking like “a flat, brown duck.” But her sewing skills steadily improved. Her mother continues to provide moral support and also serves as driver and accountant when times are stressful.

Hampton studied art at the University of Toronto. Before completing year one, though, she realized fashion was what she really wanted to study. She fast-tracked the honours bachelor of arts degree so she could perfect the technical skills of her craft, including patternmaking and draping, at George Brown College. This period also marked an important step in reconnecting with a part of her heritage; her mother is from the Temagami First Nation of northern Ontario.

Hampton now proudly identifies as a First Nations designer. Even before the diploma was issued, she released her first collection, City Warriors. It was accepted as part of a 2016 runway show called Fashion Art Toronto, a first step for many new designers. She worked feverishly at night after classes for four months to assemble 13 original pieces. “That collection was based on the Native American jingle dress,” she says. “It is worn during powwow ceremonies to uplift an audience and make them feel powerful, and I wanted to reinterpret it for every modern-day woman.”

For the past year, Hampton has worked out of a studio in the Toronto Fashion Incubator, the non-profit centre that is home to so many of Canada’s rising industry stars, including Sid Neigum. “It’s nice to have my own space so I can put in a full 10-hour day surrounded by creative people who are all pushing for the same thing I am,” she says.

In September, she packed up her spring-summer 2019 collection, called Foyer de la Vice, and headed across the pond. It was showcased as part of a London Fashion Week show featuring Toronto Fashion Incubuator designers at Canada House. She then headed back to Toronto to participate in CES Presents, a Canadian fashion gala in October that supports Boost for Kids. She will also show her work in the Toronto Plus Size Fashion Show in November.

The Foyer de la Vice collection was inspired by the work of French Impressionist painter Edgar Degas and the ballet he depicted in his art. “It is conceptually inspired by notions around perfectionism and what is deemed as perfect,” Hampton says. “The garments’ compositions embody the essence of a negligee and stage wear unified to convey the ballerina’s conflict between her internal self and external pressures. The relentless pursuit of perfectionism often precedes vices, to achieve perfection or to deal with the pressures of the unobtainable.”

Hampton has forged a community of friends she affectionately calls her Wolf Pack. She’s not sure where the name came from, only that she wanted to surround herself with people who uplift one another. The gang embraces the fashion crowd, but she encourages any like-minded person to join via her website. “I use my fashion to encourage diversity and make everyone feel welcome and included,” she says. “That so many people resonate with my message is reflected in the community I’m creating.” •

The Fine Art of Jewelry

For decades, Montreal jeweller Gloria Bass has been a name in the male-dominated field of jewelry design. Her signature inter-changeable...

Fashion may be many things to many people, but good for the planet it is not. Take “fast fashion,” clothing...

A DESIGNER MUST STAY on top of things to build a global brand in the competitive bridal industry. And so,...

The Power of Legend

Vancouver fashion designer Dorothy Grant has been interpreting Haida legends through haute couture — and was the first to do...

Eco-Conscious From The Ground Up