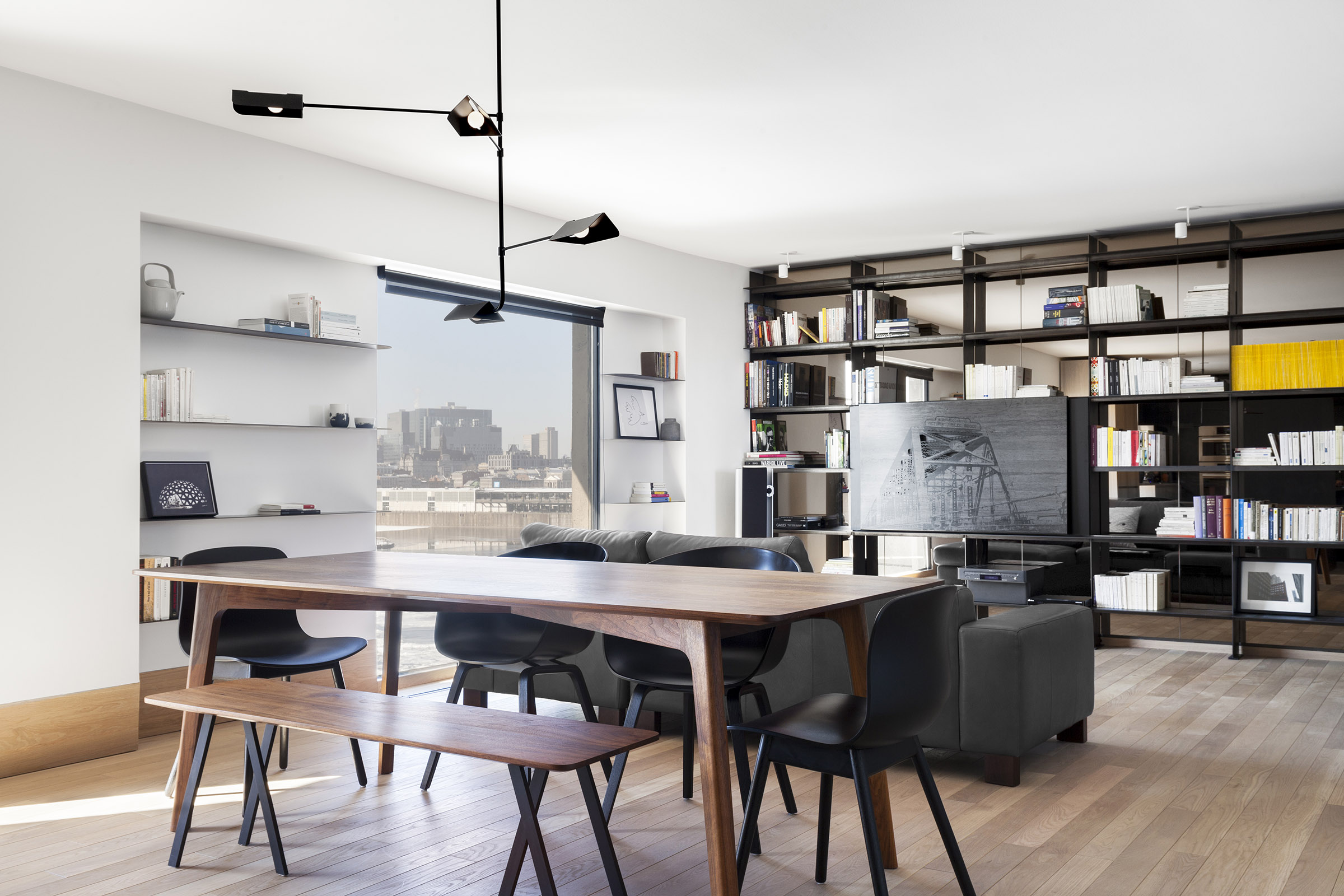 Making A Home In  An Iconic Building

A redesign of a condo unit in habitat 67 is respectful of its history, location and beauty

At first glance, it seems a little out of place: the numbers 717 are scrawled once in blue, once in red on an exposed concrete wall in the middle of a newly renovated condo in Habitat 67. It’s at the junction of the two blocks that make up this unit in the iconic building and, when it was uncovered in the renovation, the owners and designers wanted to preserve that bit of its history.

“Habitat being Habitat, there’s a lot of heritage,” says Lambert Rainville, a partner in Rainville-Sangaré, the firm responsible for the redesign. “It’s from the 1960s; the numbers are chalk. It’s tough to take off, but at the same time it is fragile, and you don’t want to touch it too much. The whole apartment is structured around that doorway.”

Like many visitors to Expo 67, the homeowner toured Habitat at the time and fell in love. “It took him 30, well, maybe 20 years to persuade his wife to move here,” Rainville says. But when the couple’s daughter moved out and it was time to downsize, he finally got his wish.

Designed in a T-shape, one building block contains two bedrooms and two bathrooms; the second houses the kitchen, dining and living rooms, giving the owners about 1,300 square feet of indoor living space. There are also two balconies, one off the guest bedroom, the other between the kitchen and dining areas. “That’s usually where the party is!” Rainville says.

The first space visible upon entering the condo is the kitchen, and a view of the river. The window affording that view was important to the owners, and the challenge was to fit all the appliances and cabinetry around it, Rainville says. “The kitchen was made to frame the view.”

The front and side kitchen cabinets have a black oak veneer; the back cabinets along the outside wall are in lighter oak. In the living room, there’s another window that overlooks the river, built into a recessed wall. To highlight that architectural feature, Rainville-Sangaré flanked it with built-in steel shelves on each side.

The owners brought very little furniture with them into this new space: their previous dining set, a living room sofa and a guest room desk.

Rainville-Sangaré designed all the built-in pieces, as well as bedroom furniture and lighting to match the Brutalist design. The living room’s back wall of raw steel shelves includes an acid etching on steel of the Victoria Bridge by Montreal artist James Kennedy, placed to hide the television. “The owner knew about the artist, and because we were going for a raw finish for the shelves, we thought he could do something interesting,” Rainville says. “He (Kennedy) made it on a special panel so it would slide. It’s folded over on the back and hooks into a rolling system.”

Behind the shelves is a wall of mirrors. It’s not original to the condo; Rainville guesses it was most likely added some time in the 1980s. The mirror is glued to the wall, so removing it would have been expensive. Keeping it was a happy compromise as it reflects light and creates a sense of more space.

The bedrooms and bathrooms are around the corner from the kitchen in the unit’s second building block. It’s in the bathrooms that Rainville-Sangaré added colour. The owner’s hobby is calligraphy, so there’s a second blue sink in the guest bathroom in which to clean his tools and inks. Both bathrooms have dichroic film coating the shower glass, a product that adds colour to the minimalist palette. “When the light source is behind the film, you see one colour; when you start moving, you start seeing new shades,” Rainville says. Depending on the angle of light, it goes from blue to pink and green, then to orange. A recent product, it’s used mainly in commercial installations, he says.

With his background in product design, Rainville says, he’s always on the lookout for interesting materials to use in detailing and surfacing. “Every year, we want to implement a new material,” he says, adding that he doesn’t often use it again. “Unless someone begs us, we’re onto something else. We’re always looking for that little touch. You never know if it’s going to work. You need to have the right client.” •