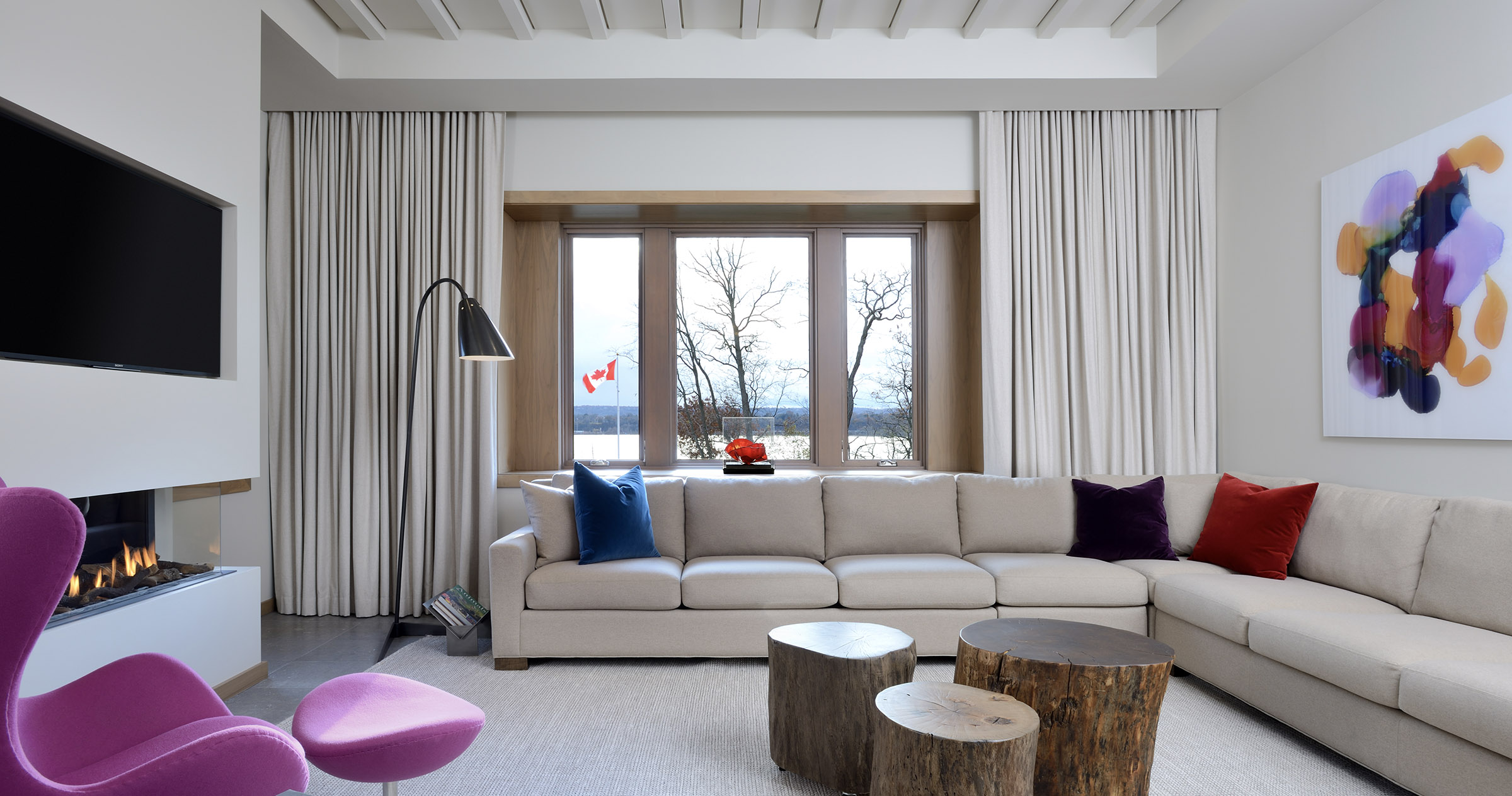 Alison and Paul Brindle wanted their new waterfront home to be designed to capture the spectacular views of Lake Ontario and their cherished gardens. They also wanted a casual environment that would give them ample time to watch their children play in the backyard snow or swimming pool.  “It’s like having our own winter chalet and summer villa,” Alison says.

She credits builder Aaron Smith of Granite Shore Homes, architect John Williams, designer Rodney Deeprose, as well as Rhonda Thornton and Jack Creasy of Bloomsbury Fine Cabinetry for making their dream home a reality. “They achieved everything on our wish list along with things we didn’t realize we’d love,” Alison says.

The Brindles, who previously lived next door, sought a traditional stone cottage on the lot to fit with their established neighbourhood – but the interiors are a contemporary twist.

It took two-and-a-half years to obtain the necessary permits because of the cul-de-sac property’s location by the lake and a ravine where city drainage hadn’t been installed. “We used the time well to work out every possible detail,” Deeprose says. “That saved money by not having to rethink plans.”

The Brindles opted for stone flooring throughout the house. “To balance this coolness, we added wood finishes in many other areas,” he adds. “We installed coffered ceilings to delineate the distinct living, dining and kitchen spaces within the grand room.”

The library cabinetry, desktop, window frames and other trim were all custom-made of rift-cut oak and stained to match the woodsy wallpaper grain. “To achieve the same consistency, we went through an eight-step process that involved distressing, painting and glazing the wood,” Thornton says.

Alison says her family adores the resulting wood effect that was achieved throughout the office with less expense, leaving the budget for the coffered ceiling and the French doors that lead into the garden. “The office is used by our entire family – Paul and me to work occasionally, and the kids to do their homework or colour and read,” she says.

Bloomsbury custom-built the kitchen’s walnut cabinetry to produce a toasty ambience that contrasts not only with the stone flooring, but with the expansive glass windows overlooking Lake Ontario. “The wood also helps with acoustics by absorbing sound that would otherwise bounce off those surfaces,” Deeprose says.

Originally from England, the Brindles sought the kind of framed kitchen cabinetry that has been popular in Britain for many years, but with a contemporary flair. “We customized flat doors within a traditional three-quarter cabinetry frame to give them a modern spin on that classic look,” Thornton says. “Framed kitchens aren’t that well-known in Canada yet and there aren’t that many places that build them, but their craftsmanship is increasingly being noticed.”

Customized woodwork always instills a higher level of luxury by distinguishing a home, says Deeprose. “And Rhonda and Jack at Bloomsbury are true experts at creating the ideal flow in a kitchen’s workspace,” he adds.

Alison couldn’t agree more. “Everything is so handy the way that Rhonda and Jack set it up for us,” she says. “And the kitchen’s openness has led to the whole family becoming involved in preparing meals.”

The countertops blend with the fireplace hearth; both are French limestone with a base amber tone that echoes the walnut. “It also has this beautiful charcoal graining that gives it a bit of oomph, so it stands up to the stone flooring,” Deeprose says.

The clean lines reflect a mid-century influence in the grand room, but the area rugs, upholstery and drapery add coziness. Deeprose also integrated various table lamps with incandescent lights to produce an instant warm glow at the flick of a switch.

“Too many people nowadays want to install pot lights everywhere, but they only shine downwards without any warmth and may actually bleach out vision with their glare,” he says. “They’re much better as task lighting in places where it would be difficult to install other fixtures.”

A room with several types of wood is often more inviting and homey than one filled with furniture made from a single species of wood. The walnut dining table makes a subtle reference to the kitchen. And while the living area’s end tables are a rich maple, the imported coffee table is made of pressed steel in a wood-grain pattern to add industrial flair, as well as to wear well in a busy house with young children.

The elements have been brought together to create a cohesive whole …. and a happy home. •

From Zero To Wow In Five Days