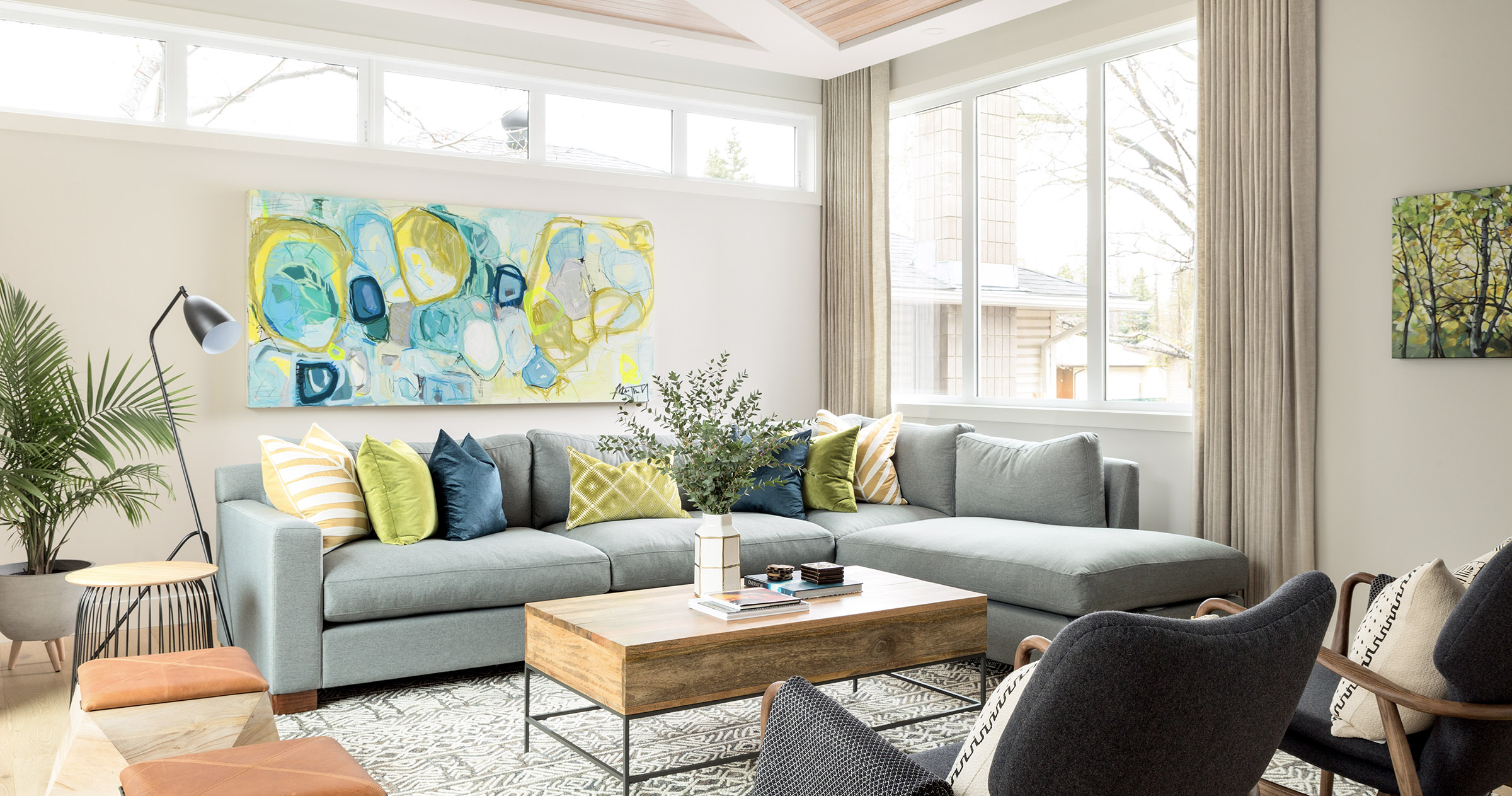 A Mixture Of Styles

The joy of building a home from the ground up is that everything can be customized, down to the last finishing nail. Emily and Chad Wignes knew what they wanted for the bare bones of their new-build modern house in the Charleswood area of Calgary: about 3,000 square feet over two storeys to share with daughter Sophie, 10, and son Beckett, 8, with three bedrooms, two guest bedrooms, home gym and entertainment area in the basement.

But when it came to appointing the main floor’s interior, the couple found their tastes difficult to define. “We wanted a casual and inviting, yet sophisticated home,” says Emily, an executive in the energy industry. “We like some mid-century and some modern, but are rather eclectic and hard to pin down.”

For help interpreting that into basic finishes, their builder, West Ridge Fine Homes in Calgary, referred them to interior designers Brent Ellergodt of Brent Ellergodt Design and Lindsay Wilder of Lindsay O. Creative.  One of the first things they proposed, the wide-plank engineered white oak flooring, got a big thumbs up from Emily. She finds it adds a fresh and modern touch throughout the home. As well, they reminded her of the Scandinavian-style home she grew up in. Walls painted white with a cool grey tint provide contrast.

The kitchen was a key area for the couple. “Preparing dinner is usually a family affair,” says Emily. “We’re all big on making things from scratch, and we were able to customize the storage so all utensils and such are right where we need them.” And the large centre island provides ample room for all to prepare meals and sit down to enjoy them. In both the kitchen and dining room, contemporary flat-front white cabinetry provides an unobtrusive backdrop, letting the backsplash tiles take the spotlight. For a mid-century touch, all lower cabinetry in both areas plus the dining room’s built-in server are of walnut veneer.

Adding items with personal meaning was very important for the couple. To that end, they commissioned two original paintings by Calgary artist Megan Jentsch. “They’re beautiful pieces, and we used the vibrant colours for inspiration in furnishing the ground floor,” says Aly Velji, principal designer at Alykhan Velji Designs, whom Emily called upon for the all-important task of pulling together a look through the finishing touches.

The larger painting dominates one living room wall, making a bold focal point. To complement it, Velji placed a large sectional sofa in muted aqua over a grey tribal-print rug. He then added a colourful mix of throw pillows: textured chartreuse and blue velvets that pick up tones found in the artwork, played against orange botanical-print linen pillows. “Our design firm is known for the way we can combine several styles,” says Velji. “And in the living room, we were able to express all the homeowners’ preferences in the furniture design.”

The curved wood-frame armchairs have a mid-century look, while their low-slung profiles add a casual note. The wood coffee table is on the rustic side with an industrial influence. The cubist wood hassocks are modern yet a little tribal, with a touch of whimsy.

With an open-concept layout like this one, Velji says, conformity is what creates cohesion, a flow from front door to kitchen. He accomplished this by repeating certain colours and textures in every room. Leather upholstery, for instance, appears on the stools in the living room, the kitchen counter stools and a front hallway bench. He also added black accents, using the colour on a mirror frame here, an occasional table or rug pattern there. “It ties in the black metal framing found on many doors,” he says. “Plus, all rooms need small touches of it to anchor the eye.”

As well, linen drapery found in the dining room gets a repeat performance in the living room. Emily initially resisted the idea as too old-fashioned but now agrees with Velji that it adds understated elegance and softness to the rooms. He also convinced her that luxury fabrics have become more family-friendly. These days, many come with protective treatments to resist stains. Or there are eco-friendly options homeowners can apply to them, he says.

The small touches make the biggest statement in the study off the front hallway. The designer chose a whimsical orange-and-pink take on a Persian rug. It echoes the design of the oriental carpet in the kitchen, a family heirloom cherished by Emily. Lindsay Wilder chose wallpaper that was applied behind floating shelves.

Velji placed white accessories on the shelves to create an interesting vignette. “We like to style open shelves in an eclectic way, with books and plants, Velji says. “And we interjected mementos of the family’s travels, which were important to them.”

The redesign was completed in 10 months and proved a pleasant surprise at every step for Emily. Going in, she had heard it would be a stressful, even nightmarish, process. “But it turned out to be really fun,” she says. “Everyone we dealt with listened to us and was very invested. I love the outcome — it really expresses our ‘un-style’ and totally works for us.” •