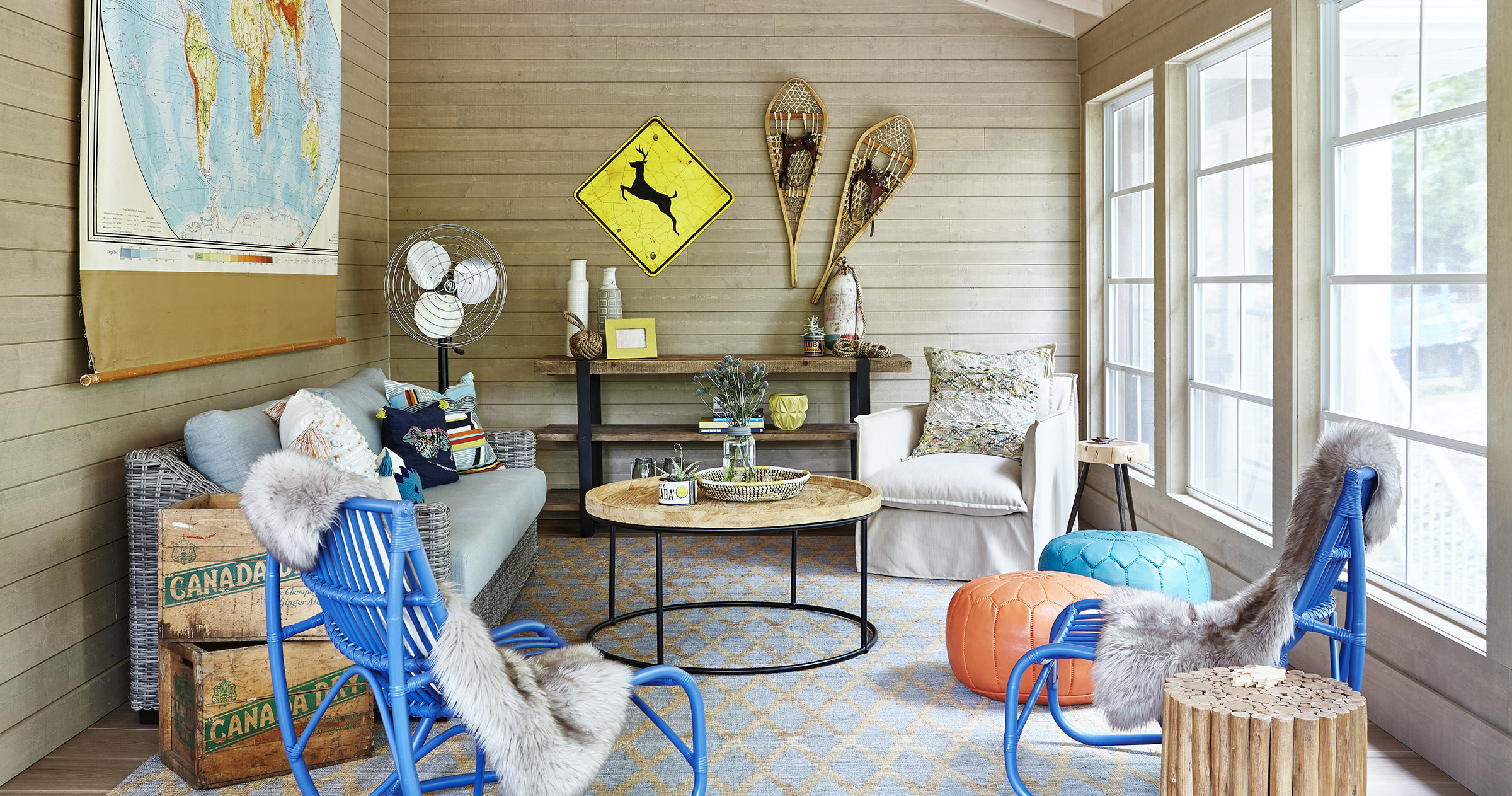 A Beautiful Antidote To Urban Life

For years, a Toronto couple heard their friends’ stories about cottage life – family bonding, campfires, water skiing. Growing up in Irish and Italian immigrant families, “the cottage” wasn’t part of their experience, but they were eager to embrace it with their own three children.

One happy summer as they were enjoying a rental on Crystal Lake in the Kawarthas, they spotted a small single-storey cottage for sale nearby. “It was yellow, old and beaten up, and the landscaping was terrible,” says the homeowner. “But my husband said we had to have it, so we jumped in and bought it.”

They gave away the old house, which saved on demolition costs, and built a new one on that same footprint, with design help from Dvira Ovadia, principal designer of Dvira Interiors. They added a second storey to house four bedrooms and two bathrooms, and a full basement, tripling the original 900-square-foot floor plan. Then they tacked an enclosed porch onto the main floor.

“The homeowner’s style is very relaxed and casual. She likes good-quality, beautiful products but wanted a natural look with no bronze or severe metals,” Ovadia says. “A lot of cottages today are glamorous; they look like a city home. She already has a beautiful home. She wanted rustic-looking, distressed and very relaxed.”

The main floor includes the open-plan kitchen, living and dining rooms, as well as a powder room and a separate laundry/storage room – complete with two wine fridges – off the main entrance. Ovadia chose a high-quality laminate floor throughout, rather than hardwood, for its practicality and durability.

In the kitchen, to contrast with the white walls and Shaker-style cabinets, she installed a walnut island that stands out from the neutral palette around the home’s perimeter. The backsplash is stone tile, adding texture and keeping with the overall natural design motif.

The main living area includes a large stone fireplace, and it has barnwood-clad walls. Ovadia describes the decor as very mix and match, old and new, with many of the pieces sourced from vintage shops. The dining table needed to be large enough for guests, and though it’s new, it looks as though it might have come from a long-ago farmhouse; downstairs, there are old school-house chairs at the craft table. The reds and blues on the antique maps of North America and the world inspired her as she chose accent colours. Drapery and upholstery fabrics were chosen in linen, burlap and similar materials for their natural look and texture.

“We wanted it to be comfortable, cozy, a family-friendly place,” says the homeowner. “I don’t want to care where the kids are eating or how they’re using the furniture. We wanted a place we would want to come to, that would stand the test of time, and where we could retire to one day.”

It’s the enclosed porch, though, that’s become the heart of this vacation home. Its walls are covered in horizontal planks of bleached wood and it holds two seating areas and another dining table. “That’s where we live,” says the homeowner. “We eat every meal in there.” Since the homeowners often have friends and family staying with them, Ovadia created one seating area with a sofa for larger groups, and a smaller, more intimate area as a conversation zone, with four large wicker chairs where the adults could chat and relax with a glass of wine or just enjoy the sounds of the lake.

The basement area was designed as a children’s zone. Bunk beds that can sleep up to six people are tucked away behind a sliding barn wood door. There’s also a games area and ping pong and craft tables. The bathroom here, like those on the upstairs bedroom floor, is a mix of what Ovadia calls “high-low” – where the homeowners invested in natural stone for its timeless look, but chose a less-expensive pre-fab vanity. “It’s a guest bathroom, tied to the bunkbeds,” she says, “but it has the same feel as the rest of the house, of those rustic elements and found objects.”

During the school year, commitments to hockey teams and other activities limit how much time the family can spend at the cottage, but that all changes come spring. “Summer vacation is so precious and important,” says the homeowner. “We don’t miss a weekend in the summer. We go from the May long weekend until hockey starts again in September. We have two cupboards full of board games and puzzles, we build fires and eat burnt marshmallows. It’s all stuff we never do in the city.” •