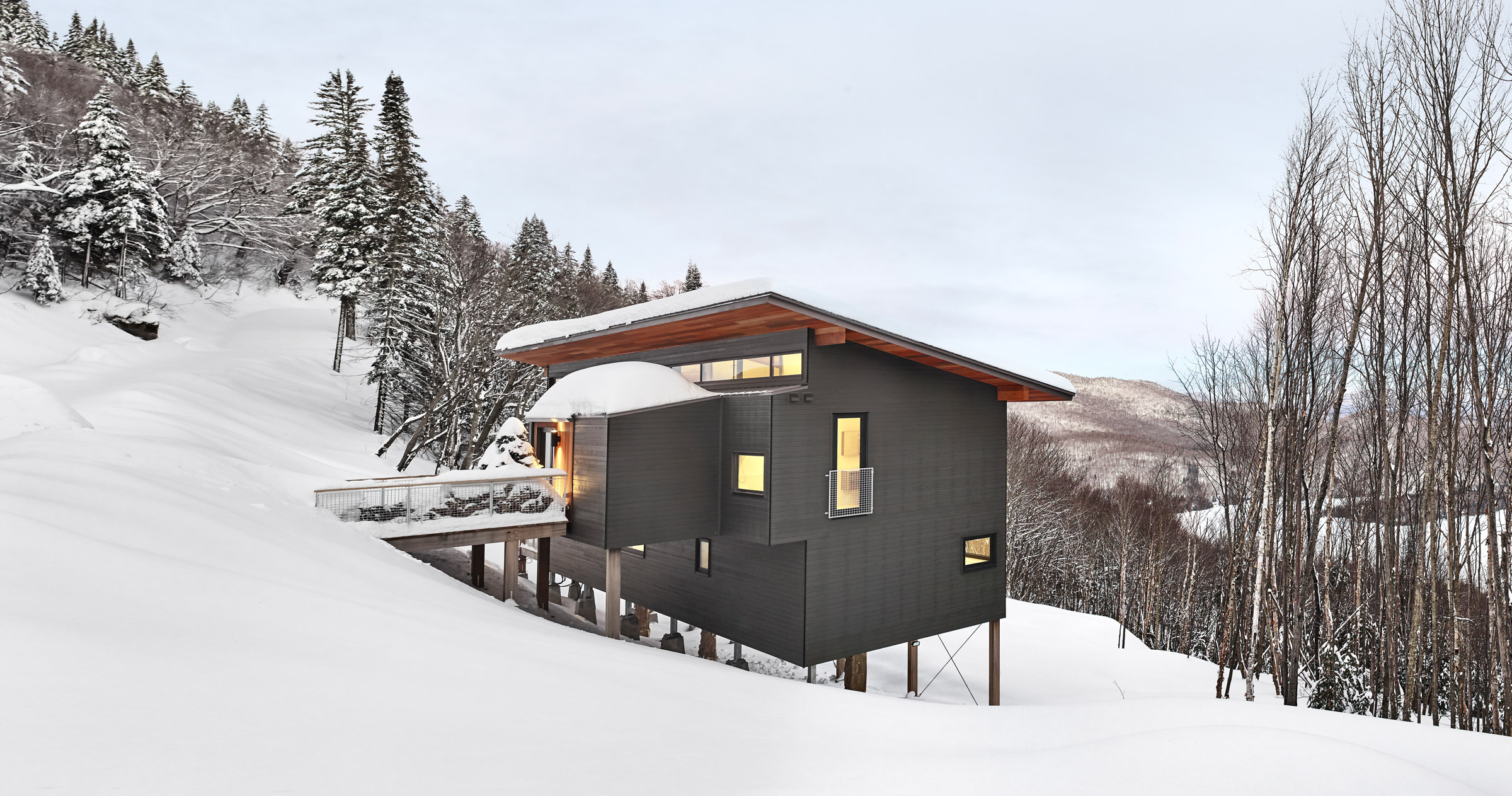 Like an eagle’s nest, this ski chalet in the Laurentians overlooks a majestic landscape

The perch seems precarious for this the newly built ski chalet but the view is spectacular. It’s obvious why the owners, a Montreal couple with two school-aged children, would want this site on a former ski hill near the village of St. Donat for their weekend retreat.

The how is quite another story. The project’s lead, Andrew Curtis, architect and partner at Montreal architecture firm Robitaille Curtis, worked with the owners to find the then-empty lot. “At 2,435 feet above sea level, it’s on one of the highest points in the Laurentians, which added to the difficulties,” Curtis says, “We had to build the house to withstand deep snowdrifts in winter and torrents of water during the spring runoff.”

The solution: build the 2,750-square-foot home off the side of the mountain. It is stoutly supported by eight-inch-square cedar pilotis, stilt-like supports more often found in tropical areas. This means that water flows under the house rather than bombarding a basement. The slant of the metal roof echoes the slope of the mountain, and dark-stained white cedar siding helps it to blend in with its surroundings. In summer, the nearby forest landscapes the space underneath, filling it in with ferns and mosses.

Getting the aesthetics right proved an easier task. Prior to the planning stages, the couple invited Curtis to a home they were renting in the area. It served as an example of what a clean contemporary look meant to them – which turned out to be in tune with the architect’s approach. The prime directive was to open the house up as much as possible to the stupendous views while maintaining the family’s privacy.

Curtis’s unconventional entryway design helps with the latter. Family and friends alike enter via a private bridge suspended in the air. It lets into a cozy area with storage for skis, boots and coats. A staircase leads to the lower-level family room, children’s bedrooms, guest bedroom, bathroom, and spa.

“From the entry, the room virtually explodes before you,” Curtis says. “It gives the homeowners the wow they wanted.” And because the owners entertain frequently, they were willing to dedicate almost half of the overall square footage to the main floor’s open floor plan with kitchen, dining and living areas.

Upon entering, guests take in the room, with the breathtaking views as backdrop. A 27-foot-long panoramic bay window wall extends the full length of the kitchen and dining areas. It is set in a long linear bay, cantilevered off the main structure. A window seat runs the length underneath, with built-in hidden storage and comfy upholstered cushions on top.

A crowd can easily gather in the kitchen after a hard day on the slopes, either lounging on the window seat or sitting at the facing 14-foot-long island. “The island has a gas cooktop and prep sink, so the hosts never have to turn a back to the view or to their guests when entertaining,” says Curtis. The rich warmth of the American cherry island top contrasts with crisp flat-front white lacquered cabinetry and black granite countertops.

The living room is at the opposite end of the house, on the south side. Daylight streams in from three sides, with a bay window opening up to even more vistas, including close-up views of the mountain slope on one end. The wood-burning fireplace serves as a focal point. Double-sided, it also provides warmth to the expansive deck on the other side, which is accessed through sliding glass doors.

As a nod to the traditional chalet, cedar-planked ceilings were installed throughout the main level and peep out from under the eaves on the exterior. In contrast with the grey-washed white-ash hardwood flooring, the effect is dramatic, yet also gives a warm spa-like feel, says the architect. The master suite received the same ceiling treatment, with the same intimate effect because, aesthetics aside, the homeowners wanted their second house to feel like a home.

“Above all, the owners wanted a modern design that also had a sense of warmth and coziness to it,” says Curtis. “We used different materials in a way that referenced the traditional chalet but remains entirely contemporary.” •

Photography and Styling:Azen & Kevin Bongard Nestled on a ridge overlooking a picturesque lake, this grand Muskoka home began with...