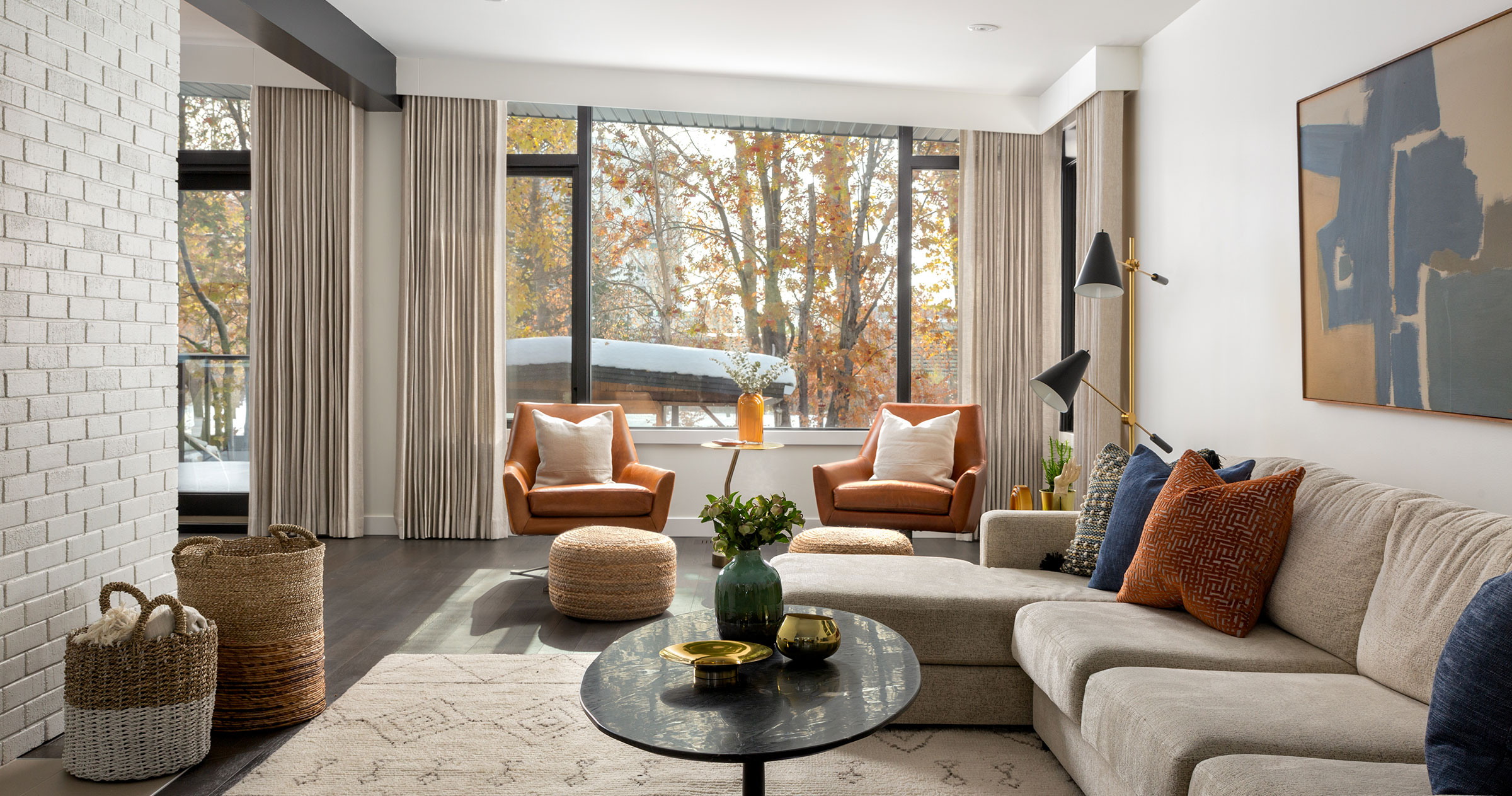 From Hodgepodge   To Happy Home

The home that the Slemko family bought was ready for an upgrade. While it was clear that it had been lovingly cared for by the previous owners, there was damage from a recent basement flood due to a water-main break. And a series of building additions over the years had left it disjointed in style and function, with three different kinds of hardwood floors and three heating systems covering various areas of the house. “The kids’ bedrooms were cold,” says Kristi Slemko. “Our bedroom felt like Hawaii.”

Despite those issues, the Slemkos could see that the Calgary bungalow had the potential to be perfect for them. With just over 2,000 square feet on the main floor, and the large basement, it had enough space to create bedrooms for each of the family’s four children. It was also right next to a park that would become an extension of their own outdoor space, and it was within walking distance of the children’s school.

By gutting the inside and taking the building back to the studs, the homeowners, working with builder Alloy Homes, were able to repair the furnace issues and make the home much more energy-efficient. They rerouted the duct work, linking it to a single heating system, added spray-foam insulation everywhere, and splurged on triple-glazed windows. “There are so many windows in the house, and we love all that natural light,” Kristi says. “Because so much area is window rather than wall, it didn’t make sense not to have that insulating factor. This will be our home at least until the kids are through school, so it seemed to make sense to make that investment.”

It paid off: a condensation problem caused the furnace to shut down last winter but the family didn’t notice for days; despite the cold outside, the temperature in the house dropped by only three degrees.

Starting over also let them design the home in the spirit of its mid-century roots. “Because this was a renovation, I wanted to ensure we were keeping true to the original style,” says Aly Velji, principal at Alykhan Velji Designs. “There were some really great details, like the entrance stairwell that we opened up to create the gorgeous slat-wall detail. We wanted to ensure each space in the home shone, but also worked cohesively with the rest of the home when it came to finishes.”

In the kitchen, white cabinets and counters line the work area with the clean lines the homeowners wanted; they tie in to wood cabinets that lead to the dining area. Colourful tiles became an important element in re-establishing that mid-century aesthetic, says Katie Nelson, senior interior designer at Alykhan Velji Designs. The homeowners chose green subway tiles for the kitchen, and classic four-by-four-inch blue tiles for the girls’ bathroom. “It helped us ensure the finishes in the space felt modern and updated, while still maintaining the personality of the original house,” she says.

The living area has a lounge space at one end, where Kristi and her husband Derek like to have coffee. At the other end, there’s a baby grand piano – a birthday surprise for Kristi. And in the middle of the two spaces is the main seating area, facing a white-painted brick wall with a semi-circular wood-burning fireplace. That had been a big selling point for the homeowners, reminding Kristi of the fireplace in her childhood home. “I never enjoyed cleaning it out; that was my chore,” she says. “But I have lots of memories of winter time, snuggling up by the fire. It’s nice to re-create that.”

By keeping the main elements in the rooms soft and neutral, Nelson says, the design team used the tile features, furniture and accessories to bring the space to life. “This also meant that the architectural features in the home remained the focus of this house,” she says. “We wanted the interior design elements to support these features, and not take away from them.”

Along with the master bedroom, there are two other upstairs bedrooms for the couple’s daughters, and two bathrooms. The designers eliminated a powder room to create a homework area for the children, with a corkboard for their art, field-trip forms and other school notices. They created bedrooms for the boys in the basement, along with a bar area for the adults and a hangout space where the children can take their friends.

“The big reason we used Aly is that we like the layered look, the textured feel. We like that the team was able to give us a good mixture,” says Kristi. “Derek didn’t want 60 pillows on the bed. We wanted it decorated, not overdone.” •